82 ratings
Note: The item you selected is currently unavailable and the distributor is most likely unable to deliver at short notice.

As an alternative we can offer you:
Behringer FBQ2496 Feedback Destroyer for $165

Having exhausted all possibilities, playing quieter, ringing out the room with a 32 band eq etc we came to the conclusion that maybe it was time to try something like this. A last resort which in actuality has taken us by surprise.

This product has allowed me to get vocals significantly louder without inducing feedback. It is undeniable that there is some detriment to the tone, however it does at least afford me the ability to hear myself in a small rehearsal space.

We set the learn filter and then we get to a point where we actually try and induce feedback, I will sing through my range and there will usually be a point where feedback begins, as I hold that pitch, it detects it and cuts that frequency. It can cut up to 12 of them, and with us, it does! Its a nice feeling to feel it working, that horrible feeling when you feel you are about to be swallowed up by feedback just dissipates to nothing...

Unless it fails, or has more feedback than it can take, at which point the floodgates are open and you are exposed to the deafening sound that it would sound like where you to try and get to that level without it.

Obviously you cant cut 12 frequencies without effecting the tone in a noticeable way, but for rehearsals at least the tone is of less concern than an inability to hear myself, which is terrible for the voice as it induces strain.

Its not a miracle device, if there is too much feedback it wont be able to handle it, and also we've only been using ours briefly so cannot comment on durability.

Finally I would also like to qualify my review by saying that I award the stars on the basis of what you get for the money. I am aware there are products on the market that do the job to an apparently higher standard. However, I think for the money, you get full value.

As with everything Ive ever bought with Thomann, wonderful service, the best price for the item new that I could find online and the security of a 30 day no quibble return should you decide you don't like it. Also, just the fact that should anything go wrong with the product they go above and beyond to rectify the situation.
Helpful · Not helpful · Report
Report rating…

Send report
handling features quality
I'm no expert... but it's a great piece of equipment
SoulWorks, 26.10.2019
I'm very much an amateur when it comes to sound gear, but this is definitely a useful product... especially if you're struggling to eliminate problems like feedback during set-up.
You can mount it on a rack tray (which we've done), but there are important controls on the rear of the unit - like mic gain & phantom power. That's no big deal if you can reach behind and know what button/knob your fingers are changing. But to be fair, once you're set-up, you're unlikely to need to change those settings.
I haven't explored all the features of this product... but so far I'm very impressed. Great price too!!
Helpful · Not helpful · Report
Report rating…

Send report
handling features quality
A bit complicated
Imre, 20.09.2014
Seems to do its job when the microfone is far enough from the speaker but handling this sympathetic and compact box is rather complicated: I haven´t quite figured out all the options because of all the buttons and not so illustrative front panel. :-) The manual only gets you started with the basic options but doesn´t explain much about the features. I haven´t visited the website yet so I won´t whine more. :-)

Latest update: This box seems to need quite a strong signal or otherwise the microphone preamp does not work well. I now honestly don´t really know do I need this item at all... The delay section is still to be checked.
Helpful · Not helpful · Report
Report rating…

Send report
handling features quality
Helps with feedback problems
27.11.2014
We use this in our band practice (gets very loud). Vocals were overrun. From mixer we just daicy chain our activa PA speakers like: mixer -> FBQ100 -> monitor PA (active) -> left PA (active) -> right PA (active). We use 1-2 decent supercardioid mics, keyboard and we have also tested electric violin. Violin feedbacks quite easily and this box helps a bit, still gate pedal would be enough.
Our mixer is quite old and does not have features like compressor.. So we are using the compressor a little, gate and auto feedback frequenzy kill from this box. This little box really does help. We can add few dbs to PA volume as well. It really makes a difference. So got a bit more volume for vocals and very little feedback issues.
We check the max volume levels before feedback issues start with this unit on, mark "max volume" and then back off the volumes to normal levels (still loud).
This unit does change the tone quite a lot. If it is pure, open, harmonic, rich what you want, then this might not work tonally for you. For us the more controlled, compressed and "cleaned" sound with this box activated is better for us than without it. User guide could be better. Does help a little, but will not do wonders.
Helpful · Not helpful · Report
Report rating…

This item has sold out and has been re-ordered. Unfortunately, our supplier cannot guarantee delivery within the next three months. We recommend that you choose a suitable alternative from our store. 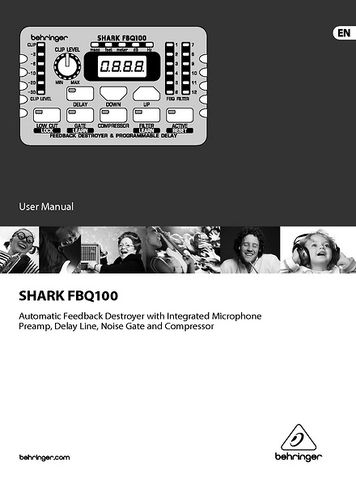 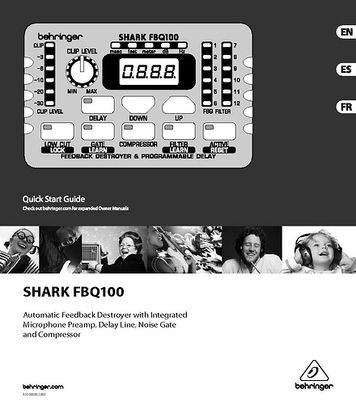 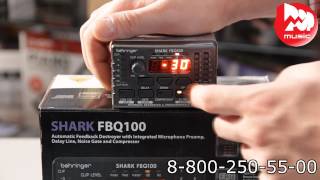 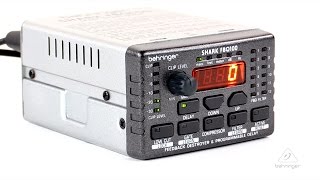 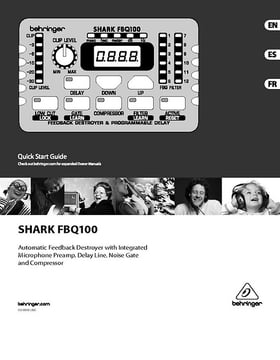 Show all
Getting started
PDF 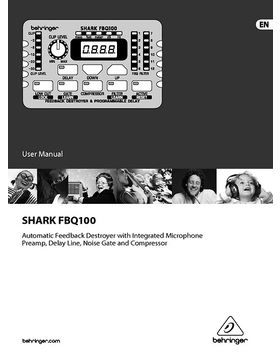