$2,222
to the product
$205
The shipping costs are calculated on the checkout page.
In stock
In stock

The Harley Benton HB-35 Plus LH is a left-handed semi-hollow electric guitar with 22 frets that is reminiscent of guitar classics, but costs far less. Its body is made of maple, and the arched top with elegant F-holes emphasises the classic look. The chrome hardware and the high-gloss "Cherry" finish also add a retro flair. The set neck made of maple ensures good sustain. It features a pau ferro fretboard with light-coloured block inlays. This provides a visual contrast and thus a neat layout. Both the body and the neck are adorned with a cream-coloured binding, which is not a given considering this guitar's price category. 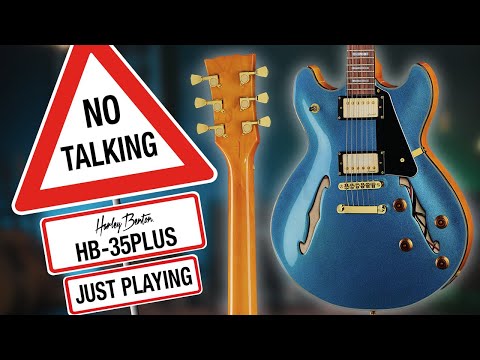 Two Roswell LAF AlNiCo-5 humbuckers in vintage style add retro charm to the sound of the Harley Benton HB-35 Plus LH. Not only is a deluxe Tune-o-matic bridge installed to prolong the vibration of the strings and reduce possible feedback, the body of the HB-35 Plus LH is also equipped with a solid mahogany sustain block. The neck is solidly shaped in a C-profile and can easily be adjusted thanks to its double-action truss rod. The 628mm scale and the 42mm nut width are typical for this design. Closed die-cast machine heads promise zero-maintenance playing, and a three-way switch is provided for the two pickups. Two tone controls as well as the separate volume controls provide a harmonic, fine-tuned sound.

The Harley Benton HB-35 Plus LH is a great instrument for left-handed fans of the great guitar classics of the 1960s. It has a stunning retro look on stage and can deliver a typical semi-acoustic sound both live and in the home studio. The vintage-style pickups also do their part. This guitar is therefore suitable for left-handed beginners, for guitarists looking to expand their sonic portfolio, and also as a backup instrument for stage guitarists. Those who can do without a tremolo will therefore feel comfortable with this model - and a fixed bridge provides better tuning stability anyway.

From Blues to Jazz to Indie and even Rock: On stage, the Harley Benton HB-35 LH Plus is an absolute eye-catcher, and is also suitable as a backup guitar for players who also own more expensive guitars. In the home recording studio, it can be used to record songs that evoke good old Chuck Berry. Repeated double stop motifs, power chord riffs, and rich-sounding melodies are no problem with this guitar. If you want to achieve the signature sound of this era, tube amps with sufficient headroom are a particularly good choice.

"AlNiCo" is short for an alloy of aluminium, nickel, and cobalt. Before strong magnets were made of so-called rare earth metals (e.g. neodymium) in the 1970s and 1980s, magnets made of AlNiCo alloys were considered to be both the strongest and the least corrosive material. For this reason, they were also used in guitar pickups. Due to their widespread use, their warm and smooth tone became firmly established as the hallmark sound of entire generations of music lovers. Additional numbers on the AlNiCo pickups indicate the strength of the magnets used. However, the order of the numbers is a little mixed up. The weakest version is the AlNiCo 3, followed by the AlNiCo 2. AlNiCo 5 magnets produce the strongest magnetic field. 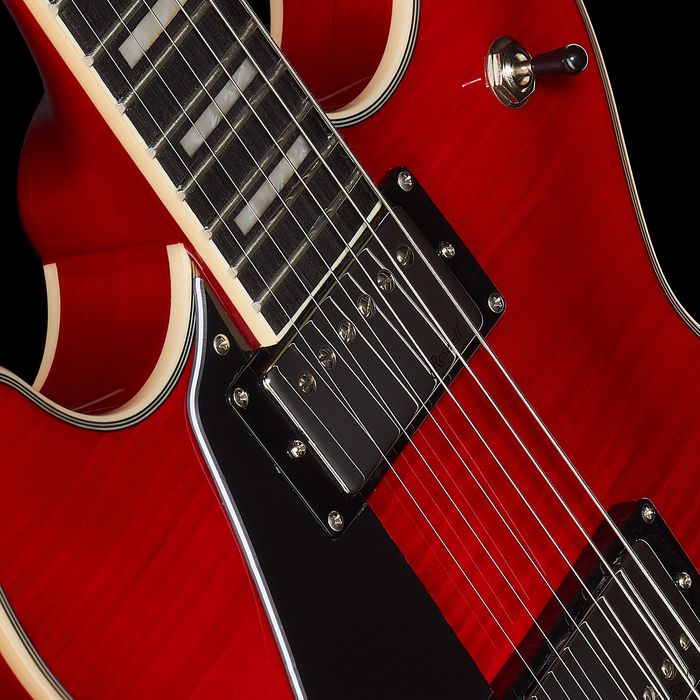 V
Everyone says it….and it’s true! Vicpnut 11.02.2022
I’ve had my HB-35Plus LH Cherry for about a month now….so , I’m not much of a player .I started later in life so I get dissuaded often but always come back for more …decided awhile back no more higher end guitars ,they don’t help anymore than a inexpensive one setup well.which I’ve learned how to do. Well with this guitar that learned skill was all but unneeded . Very small tweaks to get it where I like it and it was / is about perfect. I know every one says how great they are for the money and they are ,but I say just great forget what you paid.. literally the only negative I have is the frets needed polishing ,they were very rough .that being said the fret ends are the smoothest I’ve had ,or at least equal to guitars I’ve paid multiple thousands for …it baffles me they’re so well finished on the ends but fret tops are like untouched .but it’s how I’d prefer any inexpensive guitar to be skimped on if I had a choice .it takes very little to polish frets ,but a ton of labor to finish fret ends ,so no complaints here.. the front pickup volume knob was broken but still stayed on (barely) so I changed em all out for some old epiphone LP custom knobs I had laying around. Doing this broke basically all the original knobs , they’re very cheap but would’ve been fine and looked fine if none were broken during shipping …the only what I’d call a complaint( for lack of better wording only) I have is the mounting of the stop Tail Piece. Because of the archtop they don’t seat all the way down and made me nervous at first.. seeing the splines that are normally hidden showing above the top is discerning …I tried setting them further but notice there is one point on the inside corner area that is touching the top,with no spline showing .so they’re in as well as they can be when put in perfectly straight (@ a perfect 45* angle to top ) .so I’ve learned not to look a it . …enough of that negative searching … fret board and frets are level / even ,more so than my squire classic vibes (50’s tele &60’s strat) which I paid a lot more for …maybe that is just I got lucky but I mean they’re perfectly flat /even / level or however you would describe it . I don’t know what electronics are in it aside from the description on thomann website. I have no need to take em apart as all work well and tone is to die for …seriously great tone ! The top is very very nice. It’s not an AAAA top as it says in the description but there is no issue with it ,it looks very nice. I can’t really think of anything that “needs” fixing or replacement …guitars are subjective in many ways so maybe some would have a need to switch out pups ,pots etc etc which is fine . So if that’s something you’d normally do I think this is an awesome starting point . Or if you can forget it was so inexpensive and not be a headstock snob it is absolutely great as is …I may be a shitty player but I know enough to say this is a great guitar for beginners and way beyond . You would not be disappointed if you paid high end epiphone prices for this and very worthy of trying out . I highly recommend and only took a star off quality because of top not being what was described,and the need for fret polishing .
features
sound
quality
0
0
Report

L
Excellent guitar for an excellent price Leftystrings 16.12.2019
Being a left handed guitar player, it is almost impossible to find a decent guitar for decent price.
At first I was skeptical about the Harley Benton guitars from Thomann, but for that price I gave it a try.

The build quality is just excellent. Nice heavy wood, feels like a real guitar :-) The frets have no sharp edges and the binding is flawless.
The sound is top notch: full and with a lot air (what you expect from a semi-hollow). It looks like the neck has a C-profile, like they used in 50's. I like this kind of neck it provides a good grip , unlike those flat and fast necks of late. The split-coil option makes the sound options even more interesting.

Although for this price it is unjustified to have any complaints, but there a few opportunities for improvements:
- The tuner pegs feels loose. Although they do not result in any de-tuning of the strings
- Although you can see the maple stripes the lacquer could be more transparent to my taste
- The pots for tone and volume are reversed, i.e. 0 = open , 10 = closed. Looks like they installed it for a right handed guitar.

All in all great value for money, even if you are a more experienced player!
features
sound
quality
10
1
Report

E
A steal... Egoless 21.12.2021
The budget guitars surely improved over the past years. This thing is phenomenal for the price. Now I expected a flaw here and there, and the only things I could find were 2 block inlays mislplaced a bit from the center and a tiny, almost unnoticeable rough edge in one f hole that can easily be smoothened.

The setup is decent, action is good. I had to adjust the intonation a bit.

The sound is absolutely amazing, it is a 355 style fat but present tone especially on the neck pickup. The added coil split options are a big surprise too, getting a "strat" style tone easily. Prior to receiving the guitar I already failed a blind test so I knew it will sound good.

Pots are decent. Volume pots could have a bit more resiststance to them. The only con is, similar to HB bass I have, the tone knob sound changes very exponentially. From 1-9 sounds keep changing only at around 7. Considering the fact its the same problem as with their tele-bass clone I have, they are obviously choosing wrong pots, or have an enormous batch of wrong ones they need to lose... Its not personally a big issue to me.

All in all, considering the price point the guitar is a steal and most importantly worth investing more to make it even better.
features
sound
quality
0
0
Report

CA
Great value! Pick-up switch is in a rather odd place Cyprus Andrew 04.11.2021
This is my second Harley Benton and it's really amazing value. I had to do a little adjustment; raising the pickups and lowering the high string action. There are a couple of minor "issues" - firstly, the pickups aren't horizontal; if they were, they could be raised a bit more. Secondly, the pickup selector switch is quite easy to hit accidentally when strumming. I'm not sure why it's there; on the Gibson/Epiphone 335, it's below the strings amongst the volume/tone knobs and much harder to hit by mistake.
features
sound
quality
3
1
Report