Traditional-looking guitar in front, high-tech instrument in the back: The Harley Benton HBO-600TB combines state-of-the-art materials with the expertise of historic luthiers. Even back then, they knew that a rounded back sounds different from a conventional sounding-box – not louder, admittedly, but softer and more resonant. Round-backed instruments made of wood are of course very costly to manufacture – luckily however, these can be made from modern ABS. Add a pickup, and you get a stage-worthy guitar of a very special kind. 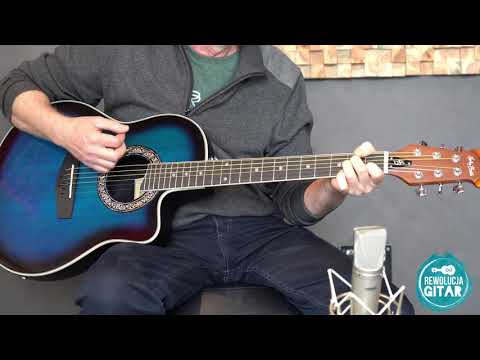 Crisp highs and a compressed tone

With its rounded back and spruce top finished in high-gloss blue burst, the Harley Benton HBO-600TB has its own unique tonal personality. When played acoustically, the shallow bowl delivers a subtle-sounding tone, which is focused through the central sound hole, and the X-braced spruce top adds crisp and slightly compressed highs. The pickup is housed beneath the bridge saddle, and the output can be finely tuned as desired by adjusting the bass, mid, and treble frequencies. The mahogany neck features a dark roseacer fingerboard and, with a nut width of just 43 mm and comfortable C-profile, is shaped to fit the player’s hand perfectly.

For fans both present and future

The characteristics of the Harley Benton HBO-600TB naturally make it ideal for the stage. This type of round-back guitar has a dedicated fan community – and no matter what the style, they use these instruments anywhere and everywhere. The HBO-600TB gives round-back guitar afficionados on a limited budget access to the instrument of their dreams. However, its potential is fully realised when used on stage, where the guitar can easily be amplified to thunderous volume levels and played with unrivalled comfort using a strap thanks to its shallow rounded body.

The Harley Benton HBO-600TB is a real workhorse, designed for the rigours of everyday use – preferably on stage or in the rehearsal room, but it is equally at home at youth club meetings or in the pedestrian precinct. Despite its shallow body, the sound of the HBO-600TB cuts through astonishingly well even when played acoustically. Guitarists will definitely shine with this instrument, which looks distinctly different to run-of-the-mill acoustic guitars.

g
Not bad at all graymac 07.04.2020
This is the third HB guitar I've bought and it's also the cheapest one as well. (I have the GS Travel-E Mahogany and the HBO-600TB's "brother", the classic nylon string HBO-850).
Out of the box, looked well enough and even seemed to be in tune already (it was, relatively, but not to concert pitch). A quick retune and I gave it a go. The frets aren't dressed as nicely
as the other HB were when they arrived. I will look to that later. The worst fault was the neck relief, although that was simply down to truss rod adjustment, which fixed it. Again, the other HBs didn't need attention. Some say that Harley Bentons can be a bit of "pot luck" whether you get a Mercedes or a Lada!! The two bad points I listed don't make it a bad guitar. With a little attention this guitar will be fine, perhaps a bit more care at the factory?? . I was lucky with the other two anyway, and to be fair I've heard quality complaints about the expensive brands too, so no huge deal.
Honestly, you cannot beat the price and when set up nicely the guitar is surprisingly good. The pickup works well, I imagine most players of this type of instrument use some amplification and I'm not disappointed with it. Unplugged it's "very good" rather than "outstanding" - but for heaven's sake, at under €90 I'd be justified in saying it's incredible! I will be changing the strings, the factory ones work but I suspect my usual brand will be better. I'll dress the frets at the same time then it WILL be a great little guitar.

Extra comment: Three days after the unboxing. I haven't changed the strings or given the frets a "beauty treatment" yet, but I've played it a lot since it arrived and I have to say I'm getting more fond of it all the time. A cheap guitar just shouldn't be this good.
features
sound
quality
4
0
Report

O
Mine needed a fair bit of work OutsideOfTheBox 11.10.2021
Obviously a lovely looking guitar and an inexpensive one to take here and there, especially with its more rugged design.
I guess I am not so lucky as some, as I have only had one guitar out of 8, bought from online places that didn't need lots of work in terms of fret levelling, nut grooves and saddle filing. It's no big deal for me and I have just come to expect it now. I can't really afford expensive guitars but it would be nice to get another guitar that I can just unbox and play it. The one that was pretty much fine cost £118.
I would urge caution buying cheaper guitars if you don't know how to do these setups, or simply can't be bothered to learn or are just being overly conservative with your wallet. Certain YouTubers seem seem gleefully prepared to gloss over various aspects of setup shortcomings, no doubt after been sent (probably free) guitars to review that were given the full attention. This one, bizarrely and alarmingly had both the low E and A tuned to an F! I find it slightly difficult to believe it was checked before being dispatched, and if it was, then perhaps someone should be having a little less Schnapps. I realise this is a busy time of year for retail, but... Personally I think guitars should be sent out a tuned a tone or semitone lower than standard, as it could be very hot, or very cold in transit depending on the season. At 1st I thought perhaps this perplexing tuning had twisted the neck, but it was the typical grooves in the nut which needed deepening especially on the lower strings, so I put my concerns behind me and set about making it more playable.
I still have some fret leveling to do on the higher frets and took the action down as low as possible. This is after all an acoustic which has lots of frets. I will be playing lead guitar parts for acoustic sets and recordings, and in my eyes it's scarcely worth all the frets if you can't play them without a degree of swiftness with a low enough action, but this of course takes some work to achieve and there are a number of frets causing issues. Not really surprised, but for some, that would totally suck if they don't want to be bold enough do some fretwork, and remain knowledgeless perpetually frustrated every time they hit a certain fret. We've all been there, but c'mon, YouTube is your friend with these issues. You can help other people with inexpensive guitars, kids learning to play etc.
The neck is looking straight but at any rate, I couldn't get into the access point for the truss rod anyway as the screws are in so tight that I just couldn't unscrew them for fear of stripping the screw heads, it's almost like no holes were pre drilled or something. I have the right size head on the driver, but it's only a small one without a decent handle more for electrical stuff, but I will need to apply a little relief on the neck as I plan to put a set of 10s on this. I'm used to playing 11s for standard tuning, main guitar thing, but this feels more like a set of 12s to me. The sound is very nice, better than I expected and there's that old school Ovation type crispness to it, but with a surprising amount of depth (the 12s I think) but I obviously want something lighter for lead guitar stuff (especially on account of the fact that I'm apparently a wimp who can't remove a screw)
My other steel acoustic has GHS phos 14s on it for low tunings so I don't really need anything in the middle. I would another cheap acoustic for even lower baritone or other experimental tunings, but I have 3 classicals guitars with different tensions for different tunings, so I must behave in terms of acquisitions, plus I need an electric and headphones next, because my housemate is now working nights and I can't really disturb him with playing, which really sucks after buying these acoustics and fancy sets of carbon strings. I think a nylon in Nashville tuning would be good (Same, but a tone down D G C F A D. Flat capos are available)
I had considered sending this back and looked at it for a number of days but decided to bite the bullet and start sanding and filing again, as I had done with the cheap black £50 HB electro classical guitar a few days before.
Unless something is drastically wrong, for this money, its worth persevering with setups, especially if you enjoy doing it.
For the price, I can't really give it any less than 4 stars, despite the issues.
I will be doing my Al Di Meola impressions soon.
features
sound
quality
0
0
Report

B
Great Value for the $ Blue! 13.10.2021
I own an Epiphone acoustic as well which I love but this guitar is worth the money I spent on it. Great beginner guitar or as a possible traveller's guitar as it is smaller I size
I would definitely recommend this!
features
sound
quality
0
0
Report

Go
Great balance of price and quality Georgios of Athens 07.05.2020
Great value for money. It has an awesome unplugged sound or plugged it in the amplifier or console studio. Especially on recordings it does the job with great excellence and exceeds all expectations. The front panel maybe feels a bit thin to some and the roundback is kind of slippery if you have not encountered this kind of body before, but you get familiar with this in absolutely no time, Overall is an absolutely great affordable solution and money well spent.
features
sound
quality
2
0
Report