The DSL20HR is the latest surprise from Marshall’s long-established Dual Super Lead series, and its 20-watt output makes it the perfect compromise between the one-watt DSL1HR and the 100-watt DSL100HR. At the heart of the DSL20HR are three ECC83 and two EL34 tubes which ensure that players can enjoy true Marshall tone without compromise, and the output can also be reduced from 20 watts to 10 watts. This may be a no-frills amplifier, but its features and two-channel design still provide plenty of flexibility. 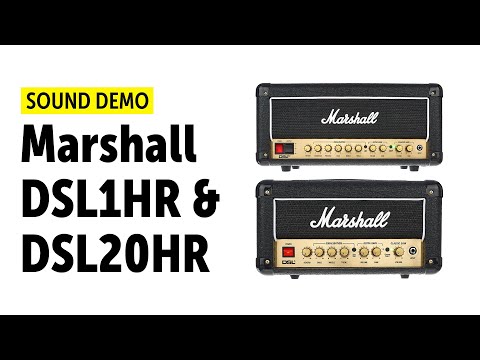 A small package crammed with features

The DSL20HR’s two channels share a typical Marshall EQ section equipped with a bass, middle, and treble control, which are complemented by resonance and presence controls. The latter are essentially bass and treble controls but, unlike those in the preamp’s EQ section, they instead shape the tonal characteristics of the amp’s power stage. The front panel also features a Tone Shift switch that slightly scoops the mid-frequencies for a more “modern” sound. The rear panel features an Audio In socket, so you can play along to music from your mobile phone or computer. It also includes an Emulated Out socket with cabinet simulation, which immediately provides a suitable signal for recording or listening through headphones. One feature makes this amplifier a real gem in its price range: A switchable series effects loop. The channels are of course also foot-switchable, and the features are nicely rounded off by a digital reverb unit.

Push it to the limit

Marshall’s DSL20HR is a real all-tube amplifier positioned in the lower price bracket that can still hold its own against significantly more expensive competitors. The order of the day is classic Marshall tone, and the DSL20HR effortlessly delivers just that. Its 20-watt output makes it easier to push the amp’s power stage to its limits while maintaining a manageable volume level, all the more so since the power output can be switched down to 10 watts. And the DSL20HR is also perfect for home recording.

An all-rounder and a classic

Whether it’s loud or quiet, Marshall’s sound is unmistakeable – and players who are looking for that sound won’t settle for anything less. Luckily, the DSL20HR admirably upholds this Marshall heritage and comes at a budget-friendly price. It is ideal for both rehearsals and gigs, and it will be a delight for sound engineers to mike up on stage. Weighing in at just over nine kilogrammes, this head will also be no problem to take on the road. So, if a true all-tube Marshall amplifier that is perfect for the stage and the living room is what you are looking for, look no further.

N
Marshall goodness! Nyxtokrolis 17.08.2021
I decided to get this amp as a transition to the analog world, having used only FX Pedals and SS Amps in the past. Now six months later, I know I made an awesome choice.

In general, this head offers the "real" Marshall experience at a low cost, and should not disappoint anyone knowing what they are going for. The sound is GREAT and the head is capable of being used for home practice at low volumes (with a relative tonal trade-off) or loud gigs where it transforms into a blasting beast.

Cons
- As with any tube amp, low volume sacrifices tone and makes the sound fizzy. Still, the tone is acceptable at 2
- Single EQ and Reverb for both channels make switching not so seamless. Especially for live playing
- Tone switch sucks out the tone instead of scooping it
- Not much headroom for cleans, in case you want them crisp and loud

For me, this amp has replaced most of the gear I used to play on from day one. I mostly play rock and metal, and I can get a great variety of sounds by adjusting the knobs or adding a pedal or two. It seems like all the digital pedal configurations are not so important when you have one thing that actually works for you after all.
handling
features
sound
quality
1
0
Report

H
Real thing Hairybaldy 07.11.2019
My amplifier mainly goes in both studio and club. Sings - God forbid everyone!
It copes with scoring of a small and medium gigs. I didn't use it at large gigs as i don't have got big venues.
Sound of both channels differs from 1 watt version for the better. However for an ordinary apartment 20 watt is way too much. Loud even in 10 watt mode. Tube gain warms guitarists soul, cooling relations with neighbors sametime.
Digital reverb is adequate, although I personally rarely use built-in. Extensive equalizer capabilities and channel switching are more relevant.
Quite decent functionality: FX loop, footswitch, audio in and output with emulation, 3 sockets with different cabinet options.
Verdict: I can recommend this model as a choice of tube amplifier for modern artists. Studio session performs good hard rock and metal with more modern styles, without extreme underground evil.
handling
features
sound
quality
4
0
Report

J
Classic marshall sound, ideal for home studios Janesz 31.03.2018
I have ordered by the purpose of recording at home, so it was crucial to find such an amp which serves good sound on moderate level of volume. I think Marshall made a step forward with this revision. I could try an older DSL model and the noise issue, which was really critic earlier, improved a lot (in the right way).
The split EQ is not the best when You're on a stage, because for sure You need different things for clean and distorted channels, but when it comes to recording this issue disappears. Although, I find the EQ section a little bit inconsistent, it is a great amp.
However, it also has to be emphasized that it brings the classic, old school Marshall sound. The well known resonance and presence knobs do their jobs as we know it from earlier. The reverb is really nice for the clean channel, sometimes I have a feeling like I play with a guitar with piezos.
There's also a tone shift by which more tweaking possibilities come forth.
Apart from the fact that the EQ section is tricky, there are no big problems with the amp. I think it's worth for the price.
handling
features
sound
quality
4
0
Report

K
Good Value Versatile Amp KMickP 08.08.2018
For the money this is decent value, an all valve Marshall with two channels,an effects loop (footswitch inluded) and various output options including an emulated out for recording or DI to a pa and easily enough volume to gig with. I chose this over the Origin for the array of modern features & the fact it has 2 channels which suits my needs better.
Using the rockier higher gain sounds, it gets a bit noisy so care is needed when recording with it but I guess that could be said of most amps. I haven?t had the oppportunity to fully crank it up in a gig situation but the lower volume tones are good and the low gain channel (clean) channel also can produce nice crunch sounds when pushed also. A good versatile lightweight head with great tone & sufficient power to gig with & a good array of features for most users! Delivered in less than 48 hours by the guys at Thomann, excellent!
handling
features
sound
quality
1
0
Report