With the Origin 50C, Marshall has gone back to what it does best – and has put it all into a budget-friendly package. This puristic, single-channel tube combo is equipped with a 50-watt EL34 power stage and a single 12-inch Celestion G12N Midnight speaker, and delivers a sound reminiscent of the legendary JTM45 and JMP Super Lead 1987 amplifiers whilst offering contemporary features such as a master volume control, a gain boost function, and an effects loop. A footswitch for switching the boost and effects loop is also included. 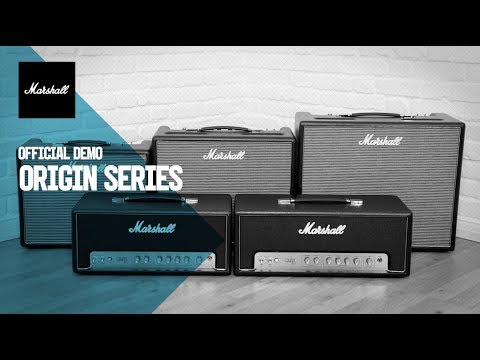 Plenty of output from the power stage and a perfectly matched preamp stage, both equipped with all-tube technology, and a Celestion speaker are really all that a Rock guitarist needs in an amp. The straightforward circuitry of the Origin 50C combo is aimed at musicians looking for that classic Marshall crunch at an affordable price. The level of gain can be controlled independently of the output volume and can be further enhanced using the switchable boost function, conveying a genuine “Vintage Rock” spirit. In addition, the Tilt control allows you to blend in a second, more treble-rich voice with the normal one, which was achieved on the classic 1987 and 1959 models by bridging the inputs. The Origin 50C also gets its overdriven sound from the power amp, however – and since the output power can be reduced to 10 watts or even all the way down to five watts, you can now get that sought-after sound without peeling the paint off the walls in the process.

For musicians, not collectors

Rare vintage models or even current reissues of Marshall classics, which are often hand-wired, seldom fall within the budget range of most beginners or up-and-coming players. Thankfully, the Origin series now delivers that classic Plexi sound at a much more affordable price. The Origin 50C combo caters to guitarists who appreciate British Rock sounds and the purist single-channel concept. With its potent EL34 power stage and mid-rich Celestion G12N Midnight speaker, this combo cuts through perfectly and is ideally suited to use in the rehearsal room and on stage, but can also be used in the living room by lowering the output power to as little as five watts.

True Marshall tone for every application

The Origin 50C is explicitly geared towards that dynamic crunch for which Marshall is known and loved. For an extremely fair price, you’ll get that typical Brit Rock sound in your living room or rehearsal room, on stage, and of course in the studio. Its variable output power, power amp saturation capability, and useful extras such as a foot-switchable boost and an effects loop certainly add value to the package. Put simply, the Origin 50C is practical and to the point!

Everyone is familiar with the two input pairs on Marshall’s classic 1959 and 1987 heads – one for the normal “warm” channel and one for the crisp-sounding “high-treble” channel. To use both channels simultaneously, players had to connect the two input sections with a patch cord. The Origin Series' Tilt control now eliminates the need for this “bridging”: You can dial in the desired tonal balance between both channels by simply turning the knob. 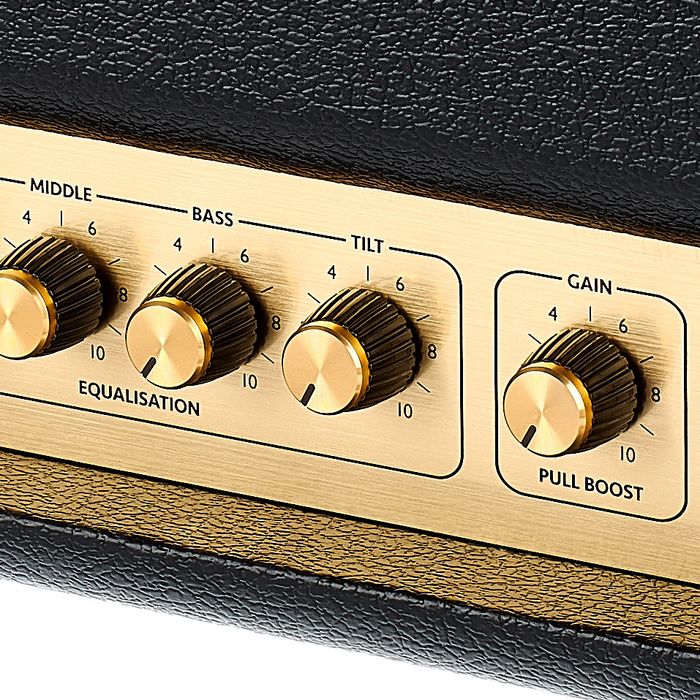 a
Nice amp! arno048 22.06.2021
I've owned this amp for a little less than a year now, and I must say I'm quite pleased with it. I've been using it playing bluesrock and some alternative rock in a power trio. I'm also owner of a Fender blues deluxe and I must say that when it comes to lower volumes I prefer the Marshall. When it comes to higher volumes it would depend on the music I would play.

Ups:
- Great looks. I just like the ''vintage'' look of it.
- The Amp sounds good at the lower volumes and has the ability to switch between power.
- It takes pedals very, very well.
- It gives a natural overdrive/crunch when you make it work at higher volumes.

Downs:
- The footswitch must be connected when using the FX loop (like I do), otherwise it won't work. The footswitch also has annoying bright LED's and now takes up unnesesary space on my pedalboard. Might consider making a device that connects to the FS connection and keeps the FX loop activated.
- No built in reverb. I have one on my pedalboard, but I'm sure some people would consider this a disadvantage.
- Very good at cleans, but needs pedals in order for your dirty sounds. But then again, that's what the pedalboard is for.

Overall: quite pleased and I would definitely recommend it.
handling
features
sound
quality
1
0
Report

s
Conclusion for so far ssscan 14.03.2020
Stil testing the amp and was verry happy with it at low volume but now after testing it yesterday together with drums and must say I am not convinced with it by higher volumes. The sound is much different clangy sounding and not going away while tweaking the tilt/EQ/presence, the sound changes but the clangyness stays, wich I absolute do not like... and I do not like to compromise things.
Using an Ibanez TS9 and a second stage overdrive Boss SD1 to work with the valves but still i'm not pleased with the high volume sound compared to the low volume sound and it feels like it is the speaker that does not handle it the same like it should, so I tried a different speaker in an extention cabinet with it on the 16 Ohm output and that sounds much better. The speaker in the cab is a Celestion Heritage G12H-75 15 Ohm in a Palmer cabinet, I ordered specially to get that problem solved, but did not solve, only concluded that the Celestion Heritage G12H-75 15 Ohm is much superior to that stock speaker that you can not replace it in the combo definitive because that one should be also minimum a 50w 16 Ohm speaker and the G12H is just 25w.
Tried it with the stock 16 Ohm speaker on the 8 Ohm output together with the Palmer/celestion G12H 16 Ohm on the other 8 Ohm output and not good, the G12H sounds louder and combined not really a good combination.
This said al by loud volume. Little sad because I wanted it to be great as like it sounded/ felt at bedroom volume...
handling
features
sound
quality
1
1
Report

B
harp friendly Bluto 14.01.2020
i use this ampli for my harps and a shure 520dx. perfect vintage lo fi sound, dirty and sweaty. the look is also very nice and it's not too heavy to handle. very good product.
handling
features
sound
quality
2
0
Report