Who hasn’t heard of it?

Whether in the studio or on stage, the Shure SM57 cardioid dynamic microphone is an absolute classic in the music industry. Renowned for its versatility, it can be found miking countless instruments, amplifiers, and vocals – in as many different settings. The SM57’s workmanship is of very high quality and it features a highly robust housing, screen, and grille which protect the microphone’s internal electronics and capsule from most forms of physical damage. Shure specifies the SM57’s frequency response at between 40 and 15,000 Hz and its sensitivity at 1.88 mV/Pa. 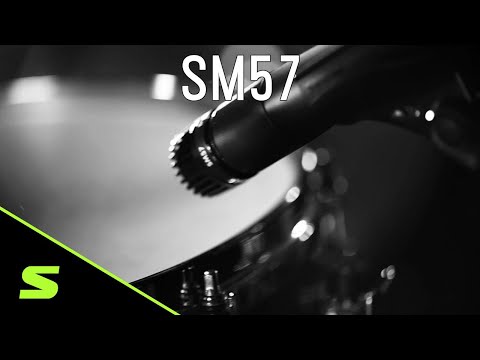 A look at the SM57’s frequency response data sheet shows that the latter is not linear but modulates, positively reinforcing key frequencies of many instruments and voices. The bass is heavily trimmed under 200 Hz, preventing sprawling proximity effects and a booming signal. Furthermore, a slight boost between 2 kHz and 6 kHz provides increased transparency and clarity, while the two dips, at 7 kHz and 8 kHz respectively, minimise harsher frequencies. The cardioid polar pattern isolates the signal source effectively, reliably reducing unwanted background noises.

Simply suitable for everyone

The SM57 LC dynamic microphone is ideal for professional-quality instrument miking. Its ability to effectively handle high sound pressure levels, a feature it is renowned for, means it is often found in front of loud sources such as guitar amplifiers, drums, and wind instruments. Live, the SM57 also works great for vocals and speech. The roster of prominent users includes Lemmy Kilmister of Motörhead and the President of the United States. Its attractive purchase price, high-quality and durable construction, and of course great sound provide an optimum price/performance ratio that will appeal equally to instrumentalists, singers, and technicians.

No such thing as “too loud”!

As previously mentioned, the SM57 LC is perfect when it comes to miking very loud sound sources, which is hardly surprising since it was specifically designed with this requirement in mind. Piercing snare drums, heavily distorted guitars, and blasting saxophone solos can all be handled with ease. Whether in the studio or on stage, this versatile, dynamic microphone will deliver an excellent sound in virtually every situation. It is near-indestructible and can easily cope with the odd drop, drumstick hit, or worse – guaranteeing its durability even when the going gets tough during live use. Furthermore, the capsule's pneumatic shock absorber system suppresses handling and vibration noises.

A
THE classic workhorse! Anonymous 01.08.2016
The SM57 by Shure is a classic live and studio workhorse microphone - no wonder pretty much every studio I've stepped in has had at least four or five of these!
It's a cardioid pattern mic with very strong off-axis rejection, a presence boost around 4 kHz, and a good-roll off in the lower frequencies which makes up for the proximity effect. Like its slightly younger brother the SM58, the 57 is almost indestructible, and almost every part is replaceable in case you do find a way to destroy something. If you find a Shure Unidyne, then this is an older model of essentially the same microphone.
The mic itself is very weighty and feels strong and robust, extremely well constructed. No lead but you get mic clip and carry pouch in the box!
This is a microphone which is suitable for all jobs. As mentioned in other reviews, it is widely used for drum kits and guitar amps etc., but as it was actually first designed for classical instruments, it can be used very effectively for acoustic instruments as well (tested on a harp and electro-acoustic guitars).
The sound of the SM57 up against an amplifier cabinet, such as a Marshall 4x12 or a Fender Bassman, is part of the classic sound of rock, and advanced modelling systems like the Roland VG-99 emulate a 57 up against a cabinet and at various distances, both on and off axis.
People often compare it to its brother the SM58 - but at least in my opinion the 57 has that bit more class when recording a multitude of sounds and I always prefer using it.

All in all, it's no wonder the SM57 is considered the industry standard workhorse microphone - can't go wrong with buying one (or two... or three ;) )! I've used 57s for longer than I care to admit, in various situations (both in the studio and live) and I've never been let down by one so I always highly recommend them!
features
sound
quality
11
0
Report

EB
Industry standard, but not for 2020 Edgar Blackdagger 16.04.2020
It is what it is, you stumble upon it everywhere and it used to be convenient for any occasion, but it's not the 80s anymore, it's got medium output, not great side and back rejection and bad off-axis colorartion (now I understand why everyone else has hi-hat issues) and its frequency responce is full of peaks and drops.
For me nowadays it should be considered as just a character mic if you want the sound of the '80s and '90s, nothing bad with that, but it's not that miraculous mic you hear about, at least not for today's standards.

For guitar cabs I prefer ribbon mics (SE electronics, even some T-bones occasionally) and for drums I went all Albini and the skies opened, now I use Oktava MK-12 mics on snare, toms and sometimes room, and the only dynamic mic I find useable is the Sontronics Solo, way quieter and cleaner bleed and a way more hi-fi mic.
Also for snare I've done some shootouts with an Audix i-5 and it was awesome, but I haven't tested what it does with a hi-hat behind it.
features
sound
quality
9
8
Report

m
Built like a tank! mynvidia 25.01.2021
Bought this as my first ever "real" microphone for recording vocals and guitars.

For around $100 I think this is the best dynamic mic that you can buy. It is a great all-arounder. Would highly recommend!
features
sound
quality
2
0
Report

r
Simply the best rockspellsinger 22.02.2019
I have 2 and I will definitely buy more in the future.
It's true what everybody says about SM57. This mic is a legend. I don't know if I can say anything bad about it, because it reproduce the sound perfectly. It has a clear and warm sound.
I've used it for guitar amp, bass amp, vocals, acoustic guitar and drums, and so far I was very pleased of the output. From my point of view, this is more suitable for live applications, since it doesn't enter in feedback so easily, and in studio I will be using it for guitar / bass amps and toms; otherwise I would go with condensers. But sometimes, even if you have a mic suited for a specific task, it is a good idea to add one of this. It will make the sound more natural.
Like SM58, it's made of metal, looking like it would last a life time. Don't freak out about the rotating / wobbling cap. It is mentioned in the specs that it's supposed to be like that. And unlike SM58, this one is smaller. So.. from my point of view it is worth every penny, even more. I believe this is a must have mic.
features
sound
quality
1
0
Report