The TC Electronic UniTune Clip White tuner combines cutting-edge tuning technology with outstanding aesthetics and functionality, which makes it the perfect tool for musicians who wish to make no compromises in terms of speed or precision when tuning their instrument. The UniTune Clip has been designed to be a reliable partner for guitarists and bassists in any situation – whether they are quickly checking their tuning on stage or making sure everything is perfectly in tune before a recording – and offers two different tuning modes: Conventional chromatic tuning and high-precision “strobe” tuning, which offers an impressive accuracy level of ±0.02 cent. 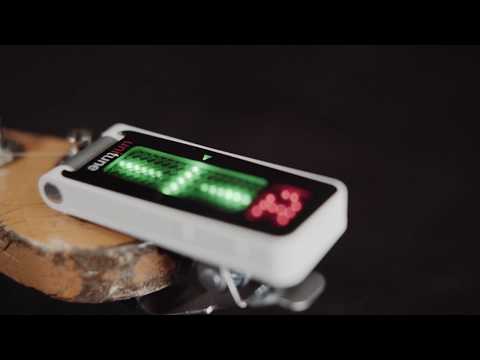 Basic electronic guitar tuners only allow the open strings to be tuned individually to standard tuning (E, A, D, G, B, and E). The UniTune Clip, on the other hand, is a chromatic tuner, which means it recognises each note and allows each string to be tuned accordingly. It can also be attached in any orientation, and the display automatically rotates so that it is always the right way up. The tuner’s highly responsive piezo sensor rapidly analyses the pitch of the note being played, and the display indicates how much tuning adjustment is required. Unlike its bigger brother the PolyTune, the UniTune only displays the pitch of one string at a time, but since players usually only turn one machine head at a time anyway, they can still enjoy the same precision at a lower price.

Discreet and perfect for continuous use

Whether you are a beginner tuning your guitar or bass every day or a professional musician who likes experimenting with alternative tunings, the UniTune Clip will keep your instrument precisely in tune thanks to its high-speed tracking and its easy-to-read note display. Despite its extremely compact dimensions, the tuner’s bright swivel-mounted display with 108 LEDs ensures a clear overview at all times, even in the darkest corner of the rehearsal room. Thanks to its robust stainless-steel clip, the tuner – which weighs just 32 grams – will always stay firmly seated on the instrument’s headstock and secured against accidental slippage.

The Danish company TC Electronic has been known for its innovative products for many years. It was founded in 1976 by brothers Kim and John Rishøj in Aarhus. The company first made a name for itself with the SCF, a stereo chorus/flanger pedal for guitar. Studio equipment followed during the 80s and 90s, notably the legendary TC2290 digital delay in 19-inch rack format. Since the 2000s, TC Electronic has greatly enriched the guitar and bass scene with amplifiers, cabinets, combos, and effects pedals. Here too, TC's innovative spirit is in evidence, for example with its TonePrint technology and the first polyphonic guitar tuner. TC Electronic has been part of Music Tribe since 2015.

Thanks to its light weight and swivel-mounted display, the UniTune Clip can be attached discreetly to the headstock of virtually any stringed instrument – whether it’s an electric guitar, an acoustic instrument, a bass guitar, or even a ukulele. Its bright and easy-to-read LED display mean precise tuning takes no time at all, which is particularly valuable during live performances. What is more, musicians who regularly play in alternative tunings can always rely on the UniTune Clip whenever they choose to venture beyond the scope of regular “standard” tuning.

M
Tune well, but not as well cobbled together as the price might have you believe Malinka 26.04.2021
I bought two of these. I'm deffo sold on the idea of not having to pay for a PolyTune function I never use anyway. So these do everything I need them too and come at a somewhat lower price. That said, overpriced they are all. They tune well, but workmanship-wise they are, well, seriously overpriced.

One of these has a very loose shoe to tuner swivel connection, meaning it moves about very easily. I use it on a guitar, so it's not too bad as it's not too far away; on one of my basses, fast access would come with the risk of actually moving it, rather than hitting the on button; or maybe that's my fault of having proportionally the correct arm length for my body size.

The second one doesn't deal well with basses (it's not the bass, I have four tuners and three basses, so have plenty of comparison). It actually tunes fine, but displays the wrong note, usually a fifth apart; i.e. it seems to pick up the route very well but the first overtone. It's not much of a biggie, coz you should be tuned-up beforehand and only need it for minor adjustments. It's just not acceptable at this price!

These UniTunes, whilst cheaper than the PolyTunes (and I never used that functionality, so welcome their simpler cousins) are not exactly cheap, so I'd expect them to live up to their price - at least a little.

But this has always been a problem with these tuners: good tuning features (bar that one UniTune), fast, but paired with cheap, nasty housing and cobbling together. On one of my 5-year old PolyTunes the housing rattles; and not only on basses but also guitars. Give it a tap and it'll stop for quite some time. But again, not at this price point!

SUMMARY: These are fast and accurate (usually), there's a reason why you see them on so many bass and guitar player's headstocks. But they a badly and carelessly cobbled together and somewhat awkward to use. Exchanging the battery should be a breeze, not a fiddle. The on-button is not in the greatest position if they're strapped to a bass, depending on where you have space to clip them. On a positive note, you can of course turn them around, to sit behind the headstock. The display will simply turn round for you.

I've not found better, so I have four of these (2x Uni, 2x Poly), they do outperform the rest. But, basically, they'll have to do until the real thing comes along.
features
quality
handling
2
0
Report

M
Don't waste your time and money with other tuners Maruel 26.05.2021
I've had various tuners in my life, for a multitude of electric, acoustic and bass guitars.

I'm probably a cheapskate which is why I've always only purchased affordable tuners. All of them always had some annoying quirks, or were slow, or just straight out wrong on a certain string, etc.

This one just works. Always. Period. Just get this, forget all the other crap, do yourself a favour.

The only thing I wish it had is rotation, since some of my guitars have a strange shaped headstock (and/or I have pick holders on the back), which means sometimes I cannot easily make it face me when clipping it.

S
good and simple Sebastian365 07.06.2021
this is a nice and simple tuner. it works pretty well, the build quality is good (the battery cover doesn't close perfectly). handling is great and it seems stable enough! recommended!
features
quality
handling
1
0
Report

H
Excellent tuner even on low B string for basses. HalfManHalfGear 18.11.2020
I bought a bunch of these for each of my guitars and basses. I prefer this model over the more expensive Polytune model as I never use the poly tune mode (in which you can see which strings are out of tune in one go). Poly mode is useless if you play bass and less accurate than tuning each string separately, so I'm glad that I don't need to pay extra anymore for a function I never use. I liked the black finish of the Polytune model -as these are only available for now in white, but that's hardly a deal breaker for me.
features
quality
handling
2
0
Report