In-ear monitoring at a budget price

Behringer's Powerplay P2 makes in-ear monitoring an affordable option and demonstrates how easy it can be for players to hear the rest of the band - and themselves - without the need for extra speakers or expensive wireless solutions. And while this budget-friendly system has just a single input and cannot be mounted on a stand, it does still provide a range of practical features and is extremely easy to operate. The detented volume control admittedly does not have the finest increments in the world, but the batteries (available as an accessory) last a comparatively long time, and the headphone output is extremely easy to access. 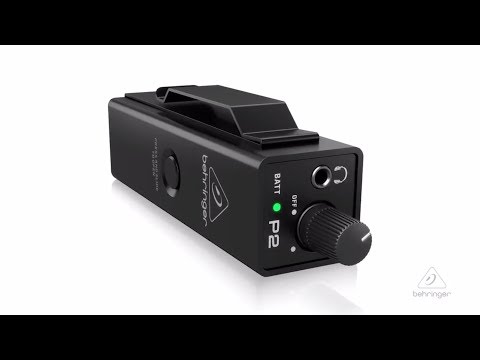 The Powerplay P2 headphone amplifier, which measures just 33 x 38 x 132mm and weighs in at a mere 140g, bridges the gap between the monitor signal coming from the mixing desk or instrument and the player's ears, and its handy belt clip means it can be kept close to hand at all times. A locking XLR/jack combo socket located on the bottom of the Powerplay P2 allows both mono and stereo signal sources to be connected easily, and the unit features an internal mono/stereo switch to allow the most suitable mode to be selected depending on the application. The 3.5mm mini-jack headphone output, which is located at the opposite end and has a resistance of 0.5 ohms, delivers up to 2x100mW into 16 ohms, and the adjacent LED indicates the battery level.

The use of in-ear monitoring allows the sound in concert venues to be vastly improved, and the immense ease of operation that the Behringer Powerplay P2 provides will allow players making their first sorties onto the stage to concentrate fully on their performance. That is not the only benefit, however - its extremely affordable price also means that their wallet won't take too much of a hit. Even guitarists and bassists can simply clip the preamp onto their belt and enjoy a consistent monitor sound wherever they are on the stage (and can even use it for practising at home). If no output signal is to be heard, the LED indicator will quickly let the player know whether the P2's batteries are the cause - a very useful feature on dark stages, and lead singers can also use the P2 to increase their monitor volume during the performance in order to hear themselves better (it isn't unknown for musicians to sneakily turn their amps up louder than they were at soundcheck, after all!).

As personal as it gets

Because in-ear monitors shut out unwanted background noise, they offer musicians the highest possible quality of monitoring sound. All that users additionally need alongside the Behringer Powerplay P2 is a set of AAA batteries - such as the Thomann LR03 AAA 4pc, which deliver an average of 12 hours' battery life. And should it be necessary to connect a stereo source such as a headphone output, users simply need to pick up a robust adapter cable like the Sommer Cable Stage 22 SG04-0500-SW and switch the internal mono/stereo switch to the stereo position.

d
powerfull and compact, Price allows no questions to be asked. djlawris 12.08.2020
P2 is a much better than a P1 amp in both: size and power.

It is much more comfortable to use it for a standing setup, because, it is not as bulky as P1. If you make a custom cable 2 xlr mono > 1 xlr stereo it works as a stereo amp flawlessly. And thats the only thing that is better on the P1.
Power of the amplification and the power consumption is way better than it's bigger brother. 9v batteries on the P1, can hold not more than 1/3 time of this AAA battery setup.. Its superb. Quality batteries hold up to 10gigs (±2hours of playing thru the night) for me. While the P1 is not as loud and powers up on a single battery only for ±3 gigs..
It has a good headroom (much more louder than a P1) for playing with a loud band and setting up a powerful headphone mix.

2 things, that could (and should) be improved:

1: Though the format is small, its not very VERY strong. I have had used it for 30-50 gigs already, always clipping it to my jeans strap, sometimes sitting on a chair, sometimes standing up, and, it's chassis has a dent around a XLR area, and a belt clip has a little lost its form.
This does not effect its performance in any way. Just it could be a little stronger.
2: The batteries, more than a few times, after a transportation have had fallen from their places, so almost 2/3 times, out of 4, after you arrive at a gig, you have to open it up and reattach the batteries in to their place.

Price - makes it a no brainer.

Would I recommend them? Why would you even ask it! Would recommend it by 150%. It is a must have for any gigging musician. Just to have it in their backpack with a cheap set of in ears (for example KZ ES4), if the venue is too noisy/loud/not enough monitors/not working monitors - you can save your day for a ±50eur and hear everything loud and clear.
comfort
features
sound
quality
3
0
Report

Ib
A good entry level headphone amp Impulsive buyer 31.03.2022
Behringer has been producing good equipment for some time now, and this is no exception. I use this as an in-ear amp at band rehearsals and it does the job just fine as the actual sounds depend on a multitude of other equipment, so it's hard to really weigh in on that.

The build itself is good and it's really robust with an accessible battery for quick changes, however, I think that the buckle is a poor design, not the quality, that's good, but the design and the placement are not really functional. That might not be an issue for everyone, but it is for me and I would like to see a better option in some newer designs.
comfort
features
sound
quality
0
1
Report

S
Makes the job for the price SBKT_v24 31.03.2022
Great product, not expensive and makes the job. Howver had some noises when plug in a Jack instead of an XLR. The metal box itself does not stay really sealed when closed. So a good interim solution for me in case my wireless does not work
comfort
features
sound
quality
0
0
Report

H
Just Get One Herms 23.05.2020
For the small sum of £30, it's just brilliant. Not all gigs I play where I'm using my in-ears need a wireless transmitter. This hard wired belt pack is perfect for smaller bar & pub gigs, even rehearsal rooms & home practise. No low end loss here, a perfect full range sound every time.
Using an XLR it works in mono only. The XRL cable also locks in to the P2 (so you won't accidentally pull out the XLR cable mid gig), as long as the XLR connector on the cable has that small locking tab. Most do, some don't. If you open up the P2 (like when to change batteries) you'll see there's a mono/stereo switch mounted on the PCB. In stereo mode you can connect a stereo jack cable and have a stereo mix. The jack doesn't lock in though, be careful not to pull it out by accident. Having the mono/stereo choice is fantastic.
Even though two AAAs last for many hours, I recommend getting rechargeable batteries & a charger if you're going to use the P2 a lot. Which you probably will if you buy one.
If you want to use in-ears, you need one of these. If you already have a wireless for your in ears, you still need one of these. Even just as a cheap back up in case your wireless battery dies in the last set of the gig, or to use at band practise, you need one of these.
comfort
features
sound
quality
3
2
Report