The combos and heads in the Marshall DSL series have enjoyed great popularity since their release, and the Marshall DSL1CR, the smallest member of the family, completes the range nicely. This diminutive, one-watt powerhouse boasts two channels of all-tube circuitry as well as some useful extra features, including an emulated line out for direct recording, an audio input for playing back music from external sources, on-board digital reverb, and an effects loop that allows additional effects to be integrated. The three-band EQ has been upgraded to enhance its effectiveness, while the Tone Shift switch allows modern scooped sounds to be dialled in. The result is clearly audible through the 8-inch Celestion speaker – housed in a reassuringly robust and compact enclosure – which delivers outstanding presence throughout the entire sound spectrum. 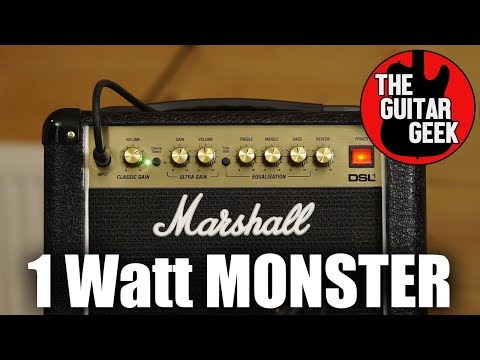 The DSL1CR’s preamp stage is fitted with two ECC83 tubes, one for each of its two foot-switchable channels. Channel 1 provides a shimmering clean sound at low volume, which is gently compressed from about half-volume upwards and gradually becomes a gritty-sounding breakup when the volume is turned all the way up. Channel 2 picks up where Channel 1 left off and delivers everything from sizzling crunch to high-gain lead with typical Marshall amp dynamics – and can then be further tightened using the Tone Shift switch. At times, however, even an output of just one watt can still be too loud, which is why the DSL1CR is equipped with a rear-mounted Low Power switch. This reduces the output all the way down to a bedroom-friendly 0.1 watts. In addition to the effects loop, audio input, and foot switch, the rear panel also features a 3.5 mm Emulated Out enhanced with cabinet simulation developed by Softube.

If you love the Marshall sound, you will definitely love the DSL1CR – and this compact amp brings that classic all-tube Marshall character into your home. The DSL1CR is ideal both for practising and recording. Because the output power can be reduced to a mere 0.1 watts using the Low Power switch, you can really crank it all the way up, let the tubes glow, and enjoy its full dynamic range and saturation effects without getting into trouble with the neighbours. Its extensive features, such as the two channels, the integrated digital reverb, the effects loop, and the Emulated Out/headphone output, will be tempting even for seasoned professionals – however, the DSL1CR comes at such an attractive price that it will appeal just as much to beginners.

For bedroom or recording session

For sure, one watt of power won’t rock a stage, but it will certainly rock during smaller sessions or at home. This makes the Marshall DSL1CR an ideal practice combo, and the recording output with cabinet simulation allows that Marshall sound to be recorded on your computer without the need for a microphone. The DSL1CR is also sure to be a real eye-catcher in the living room or bedroom.

e
More than I expected einberliner 06.02.2018
Just to be clear - in my case, this amp is used as bedroom practicing amp. Tested with both singlecoils (Fender Vintage '52 Telecaster and Stratocaster with noiseless pickups) and humbuckers (Duesenberg Starplayer Special).

First notable thing - compared to limited 1W edition it's slightly smaller, which is understandable considering it's 8" vs 10". As much as I can see myself (and also stated in official Marshall documentation) it's having 3 valves in total, not 5 as stated in product description.

Sound is actually way better then I expected it. It's not 'boxy' as I thought it's going to be (having 12" external speaker as well) and there's definitely not same level of headroom compared to something bigger than 8", but that's also to be expected.

On clean channel, you can turn it up to max and still enjoy playing inside your bedroom. 0.1W is of course welcome in case you are using humbuckers at midnight, but even in that case it's very acceptable for my taste. If you are telecaster fan then you are really going to enjoy clean channel with it. That's 'the' sound as I imagine it when I think about telecaster.

On OD channel, you can play a lot with both gain and volume. 1W there can be little bit loud, specially with humbuckers, but I think 'the issue' here is just perceived loudness since I was still able to talk over it, specially if you are not really sitting on it.

Footswitch is quite simple, it's letting you only to change the channel, not to turn on/off reverb or fx loop as advertised on other models, so don't be confused on this.

All in all, this looks and sounds really cool, and I'm quite sure I'm going to keep it.
handling
features
sound
quality
8
2
Report

m
Small and practical. mrodrigues 06.07.2019
Well it's a marshall, sounds like a marshal although it has a very small speaker. Bought this to warm up back stage preparing to gig. It's a valve amp, sounds and feels like one, but not loud enough to keep up with any kind of live performance, (not even backing tracks on a live venue). The "emulated" out sounds awful!!! It was one of the factors that made me buy this little amp, and It's totally unusable, sounds fizzy and after a short while using it, i always have an headache even using with top notch in ear monitors... the manual says it's a "high quality emulated output using Softube-designed studio cabinet"... but it sounds like rubbish... couldn't find a way to use it. Still a nice tube amp.
handling
features
sound
quality
3
0
Report

G
Mega mini Amp GBB75 12.11.2019
It is 1w. But it is great. And it is valvolar. Maybe you cannot gig with it, but for studio/home is amazing. Only cons: the reverb effect could have been better.
handling
features
sound
quality
0
0
Report