What you see is what you get

The Moog Matriarch is a further enhancement of the semi-modular Moog Grandmother. In contrast to the monophonic Grandmother, however, the Matriarch has four voices. The semi-modular design has adopted almost exactly. Instead of 41 patch points, the Matriarch has 90. Incidentally, the system is compatible with the other (semi-)modular Moog products as well as other modular synthesizers. The four analogue oscillators and the classic ladder filter are based on the old Moog modular systems, as are many aspects of the design. The whole thing comes in the usual solid and very stylish housing with a high-quality 49-key Fatar keyboard. There are no digital frills on the Matriarch, and no presets either: What you see is what you get. 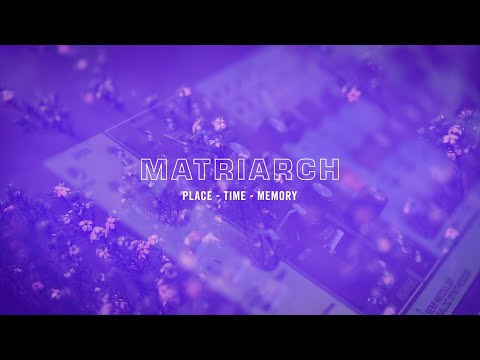 Not a mummy's boy

In addition to the oscillators and filters mentioned above, the Moog Matriarch features an analogue stereo bucket brigade echo that mirrors the unit's retro visual aesthetic. Nevertheless, the Matriarch also has a few modern features in store. On the back, for example, there is a USB connection next to the 5-pin MIDI connections. On the front, Moog offers an arpeggiator as well as a sequencer, which offers more than enough space even for the most extensive melody featuring 256 steps. As befits a modularly designed device, the classic utilities can also be found there - a signal splitter (Mult) and an attenuator, with which control signals can be amplified or attenuated.

A purist without digital frills

One thing should be clear: Like any Moog, the sound of the Matriarch is beyond reproach. If you buy a Moog, you get a Moog sound, and if you want a Moog sound, you buy a Moog - it's as simple as that. The Matriarch is certainly no Swiss army knife, but a purist without digital frills. Thanks to its polyphony, keyboardists will get their money's worth, and those who already have a modular system will find the Moog Matriarch a control centre for all eventualities. For example, an external sequencer can be integrated with ease, and the Matriarch's keyboard virtually invites you to control a modular system via CV and gate.

The US manufacturer of synthesizers, based in Asheville, North Carolina, is one of the pioneers in this field and has legendary status. Robert Moog had been involved with electronic sound generation since the 1950s and his first experience was with the manufacture of theremins. The breakthrough came in 1968 with the Grammy-winning album "Switched-On Bach" by musician Wendy Carlos (then know as Walter Carlos), recorded in multitrack with a mono synthesizer. The Minimoog, released in 1971, became the most popular synthesizer of the 1970s and is still considered the benchmark for the quality of synthesised sounds. It and the following devices, like the Memorymoog, Polymoog, and Prodigy, shaped the sound of numerous albums, from Stevie Wonder to The Police and from Saga to Kraftwerk.

In contrast to "modern" models, Moog follows a purist approach - as exemplified by the Grandmother and Matriarch - in which digital flourishes are largely avoided. The Matriarch is the no-nonsense version of a polyphonic Moog. If you are looking for a versatile sound laboratory for tinkering and interconnecting, you will find it here. With the Matriarch, Moog has expanded the functional range of the Grandmother by several dimensions and presents a work of art with character in an appealing retro design. If you didn't know that this was a synthesizer from a well-known company, you might get the impression that you were looking at a sinfully expensive boutique synth.

i
I absolutely love this synthesiser! ivoi.iovi 18.01.2022
Really, it is an incredible instrument.
I was looking to getting a Subsequent 37 for a long time and, although I was very attracted to the idea of the Matriarch, I felt like I may regret having a synth without presets. With something like the Matriarch it is especially easy to end up with very complex patches that you'll never find again without writing all of the specifics every time, and that can be prohibitive to creativity if you want to keep experimenting during play rather than taking constant notes.
In reality, though, I haven't cared about this at all and the way this synth lends to experimentation is just endlessly rewarding, even if surely the results may often be lost or forgotten.
The core sounds are beautiful and with a little patching it can get really, really nasty in the best ways! The simple oscillators can be made very complex via the various ways that modulation can be routed to the FM and pulse width ins on each one, and the overall architecture just allows for so many possibilities!
I am very pleased that a sample & hold was included in the modulation section, and the slewed waveform there allows for very interesting textural movement in the filters and oscillators, and for some of the most beautiful "tape" delay sounds I have ever heard when patched to the delay time.

When I first got this I had no experience of modular synthesis and I had no idea what I was doing with the patch points, but it is set up in a clear and intuitive manner and just a little experimenting blew my mind open in realising what could be done, and it was like the excitement of a child in some vast candy store when thinking about what flavours I could try next!

naturally, Matriarch led me quickly toward building a small modular system. Due to space constraints and a wish to learn the individual modules and their own small groups, my focus for several weeks was away from Matriarch and just on the Make Noise and MI stuff that I ended up with.. I got so carried away with all of that and discovered so many complex and interesting sounds, that I felt maybe I should have gone straight to fully modular and that I'd regret having bought the Matriarch, but then last week I got it set up again and instantly knew there was no regret at all! I had figured thing out a little better and now had so many new ideas of how to patch the Matriarch and bring the new modular family into play, but even the nights I spend with just Matriarch are constantly inspiring and have me never wanting to turn it off and sleep.

What a wonderful instrument, and what an expansive sonic playground. I would certainly recommend it to anyone who wants an analogue synth capable of going that way extra, and offering the possibility of expansion as part of a larger system. It's not cheap, but for the price I think this is a seriously good deal considering how much you can do once you learn how to really dig in. 100% one of the best investments I have made for music gear
handling
features
sound
quality
7
1
Report

A
My favourite synth alongside Moog Grandmother Anonymous 12.03.2022
No video can show exactly how amazing this synths is unless you touch it. Every touch of the knobs is so joyful and the sound is so amazing that every time i use the stereo delay the room transforms into a totally different space. It is a dream especially when using alongside the Grandmother. Can’t wait for the Moog sound studio bundle to arrive so i can have the complete semi-modular collection. A dream to own
handling
features
sound
quality
6
0
Report