Not suitable for a long-term use for guitars with nitrocellulose lacquer finish!

30 30-Day Money-Back Guarantee
3 3-Year Thomann Warranty
available since November 1999
Item number 129407
sales unit 1 piece(s)
Material Metal
Type For one instrument
Suitable For: Electric Guitar
For Guitars With Pyroxylin Varnish No
$7.30
The shipping costs are calculated on the checkout page.
In stock
In stock

There are different ways to store your instruments: While some people swear by keeping them in a case or a gig bag, others prefer unrestricted access to the instrument. There are two options for this: Wall hangers and stands. Guitar stands like the Millenium GS2001 for electric guitars and basses are more convenient than wall hangers because they are portable and can also be placed anywhere in the room. They can also be used in the rehearsal room or on stage. Being compact and easily foldable comes in handy, especially when the stand has to be taken along on a trip.

The Millenium G2001 electric guitar stand is made of metal and designed to be durable and foldable, while staying firmly in position when unfolded. The feet are made of non-slip rubber, as is the spot against which the guitar is propped up. This prevents both the stand and the guitar from slipping. The supporting surfaces for the guitar are made of dense foam. One of the support arms is bent to provide extra stability if the guitar or bass gets accidentally knocked, while the other arm is straight to avoid getting caught on the potentiometers.

Suitable for most designs

Whether you play single-cut, double-cut, semi-acoustic, ST-style, TE-style, or bass: The GS-2001 E will fit the bill. This makes the stand attractive for most guitarists who prefer to invest their money in the instrument rather than in overly expensive accessories. The guitars are nevertheless well protected thanks to the soft foam padding. There is one particular thing you have to watch out for: Guitars with nitrocellulose lacquer, such as US-made Gibson guitars, should not be placed in this stand for long periods of time, as nitrocellulose lacquer reacts to the foam and deteriorates under certain circumstances. This should not cause any problems for the duration of a performance, but storage is only recommended for guitars with other common lacquers. Users are instead advised to opt for stands with support surfaces that are either white or made from cork.

With this stand, you don't have to worry about lack of support for the neck. On the contrary: Due to the low height, there is hardly any leverage to make the stand tip over. The instrument is held securely in place by the foam-padded arms, and the rubber surface against which the body rests prevents the guitar or bass from pivoting. The angle at which the instrument stands prevents it from tipping forwards, and the supporting surface prevents it from tipping backwards. The instrument thus rests securely and can be easily removed by lifting it upwards. The four rubber feet of the stand also provide a firm hold, which ensures that the stand is not moved unintentionally. The guitar featured in this image is a typical single cut, the Harley Benton SC-Custom Plus. Technically, it's possible to leave a cable or a wireless system plugged into a guitar of this design. 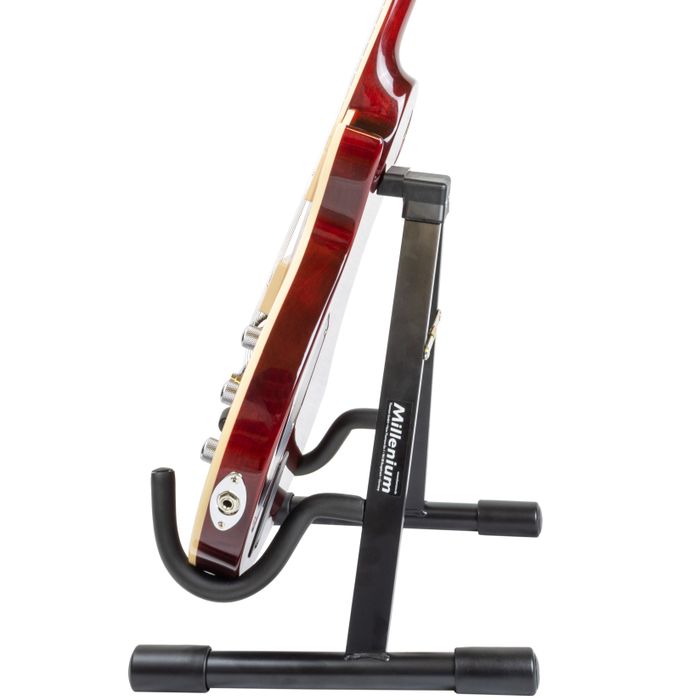 The Millenium GS2001 electric guitar stand is also well suited to ST and TE-style guitars. A Harley Benton TE-52 is resting securely in the stand shown in this picture. Even the cable can stay plugged in if the guitar is placed on the stand with the necessary care. 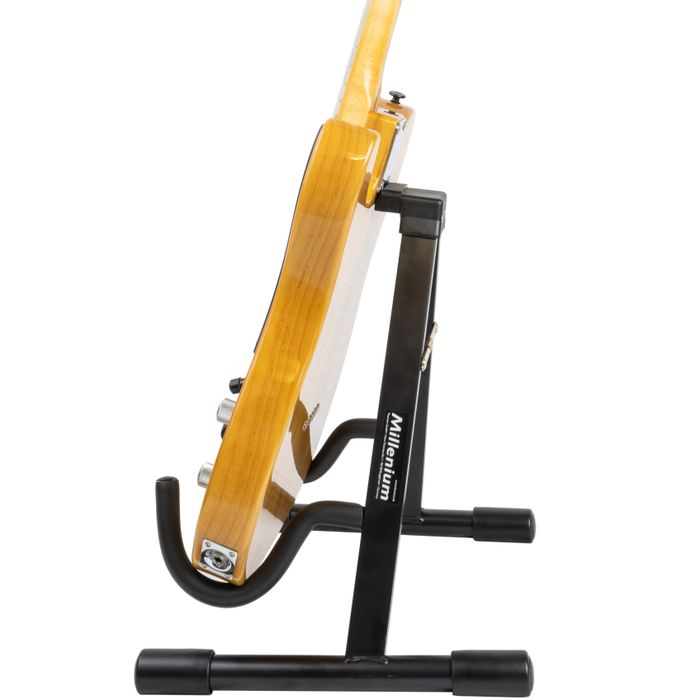 Even electric guitars with deep cutaways and rounded neck joint surfaces will rest securely on the Millenium GS2001 E. Depending on the position of the output jack, you may have to be careful with the cable. Here, an Ibanez from the RG series can be seen placed on the stand. Tremolo-equipped guitars will also fit without getting stuck on the support arms of the stand. 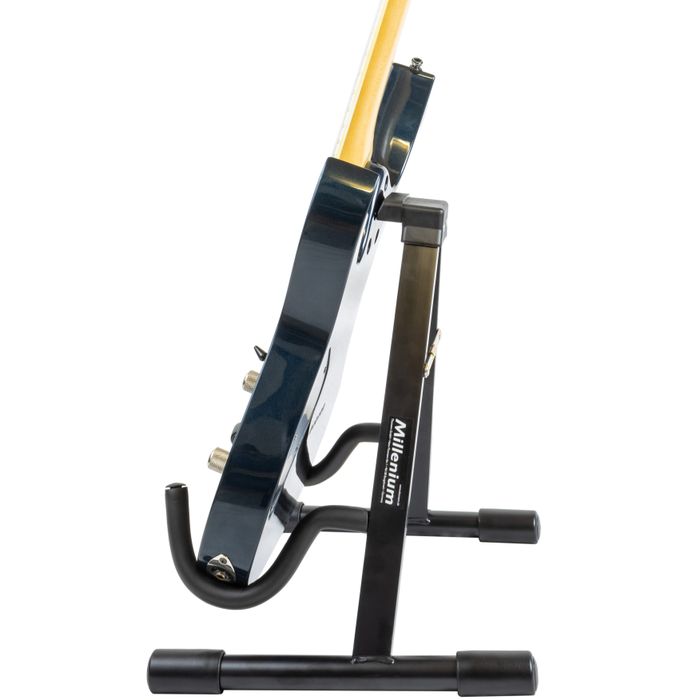 SG
Work tool. Sergey Gavriluk 02.12.2021
I bought something that could be thrown at the drummer if he was mistaken, and the rack should remain intact. It hasn't come in handy yet, but I've gone through concerts, moving in a trough with other racks and wires many times. A reliable and inexpensive rack that justifies the investment and exceeds expectations. If something changes with the drummer, I'll let you know.
quality
stability
36
1
Report

Aj
Not for offsets A. j M. 23.04.2019
It’s alright quality in general I guess, and I think that you would have an issue with acoustics or even lighter electric guitars.

However, the offset body and weight of my Fender Jaguar was apparently too much for this little piece of gear. After a couple months, it started to be very wobbly, as if both legs were moving away from each other every time I laid the guitar on them.

Over a month after that, it simply broke completely - I once laid the guitar and both legs just separated. The little plastic bit on the top (where the back of the body rests) just disintegrated into bits somehow, leaving hidden screws to dent the laquer on the back of the Jag’. Not cool.

All in all, if you buy something cheap, I guess you can’t complain when it breaks on you. I ended up throwing this one out and putting a little more money to buy one of the Hercules stands (guitars hang by the neck on them, so no problem for offsets) as I would rather invest a little more buck to avoid having to pay for paint jobs on a 1.2k€ guitar.

Though I’m sure if you’ll be using it for acoustics or very light guitars that you don’t pick up too often, it’ll be just perfect.
quality
stability
4
0
Report

MB
Holds the BASS successfully Ms. Bright 19.12.2020
Even though it is not mentioned, It's also suitable for the electric bass...
A very sturdy, well made and minimal stand that is really invisible (display-wise) but mainly you will not find your instrument on the floor with no reason! A real VFM here!
Tip for those who wonder: The "Millenium" logo is on a sticker that can be easily come off.
U-shape measurements: max width: 10cm and height: ~ 6cm
quality
stability
9
1
Report

TT
LIGERO Y BONITO THANKS THOMMAN 25.05.2022
EVERYTHING PURCHASED AT THOMMAN HAS BEEN A TRIUMPH, BOTH IN QUALITY AND IN CUSTOMER DEALING
quality
stability
1
0
Report