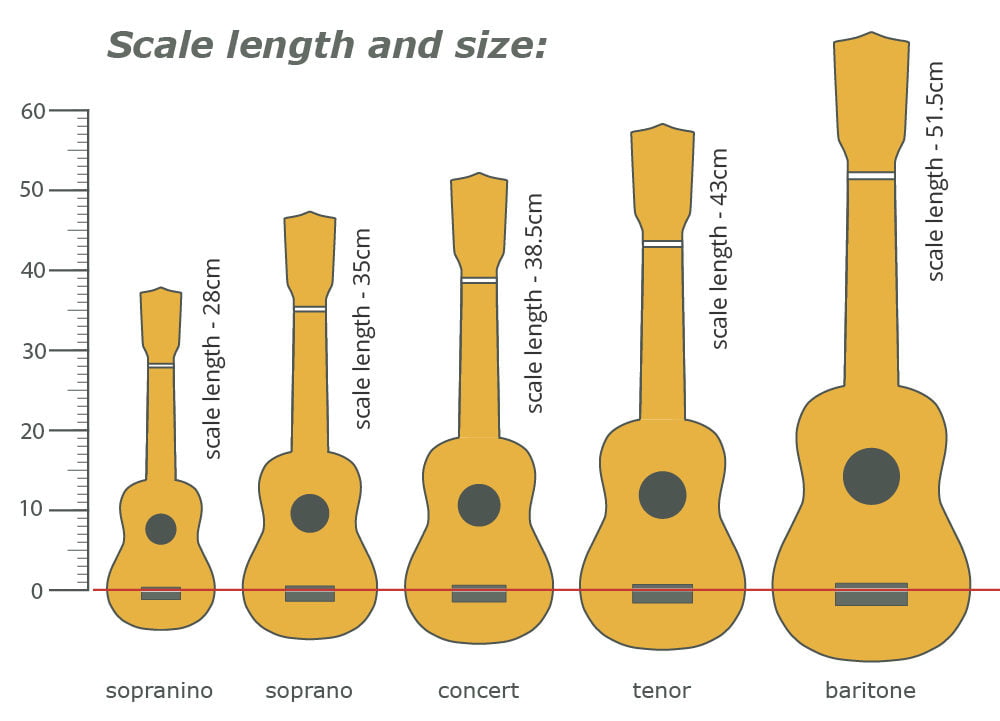 The soprano model is the most common size. The scale length measures about 35cm and the strings are tuned to g-c-e-a- (or a-d-f#-b). Its characteristic sound will automatically transport you to white sandy beaches where you'll be wearing the traditional Hawaiian lei.

Concert ukuleles are also tuned to g-c-e-a (or a-d-f#-b) and feature a scale length of about 38.5cm. They are a very convenient compromise between the soprano ukulele with its higher notes and the tenor ukulele which is easier to play.

The tenor ukulele can be as long as 43cm and is also tuned to g-c-e-a (or a-d-f#-b). With its extended bass range, this is a good complement in a ukulele duo or trio. It is also somewhat easier to play thanks to its greater length.

Sopranino and baritone models are the exceptions rather than the rule, and of the two the sopranino model is even rarer due to the intonation problems in the upper ranges and the difficulty of playing. They are not suitable for beginners. The short scale length of 20cm simply does not leave a lot of space for the playing hand.

Baritone ukuleles are particularly popular with guitar players, as their longer scale length makes for easy transition. Furthermore, it is tuned identically to the first four strings of a guitar: d-g-b-e. Its sound therefore is reminiscent of a small concert guitar. In comparison: a 1/2 concert guitar is no longer than 53cm and thus very close to the usual baritone ukulele scale length of about 51.5cm.

Which size for which purpose?

Every ukulele is great fun, whether soprano, concert or tenor!

Certainly, playing a soprano ukulele is somewhat more difficult because of how narrowly its frets are spaced. But as a solo instrument, it best conveys that typically Hawaiian feeling... Ambitious musicians, who may even have played a string instrument before, should not shy away from this even if they have never held a ukulele.

The concert size affords the player some more space for the fingers and its volume is also greater than that of the soprano. It is a good compromise of the common sizes, and thus a "golden mean", if you will.

Tenor ukuleles possess a voluminous sound and are easier for learners thanks to their greater scale length. However, more complicated guitar chords are difficult to play precisely because of this increased size.

Bringing the different sizes together

After having taken your first steps you'll probably want to try out playing with other ukulele strummers. It makes sense to assemble players of differently sized instruments in a ukulele duo, trio or an even larger ensemble.