Matt Halpern is the drummer of the progressive metal band “Periphery“ and co-founder of the company “GetGood Drums“. He is also an active music instructor and has received numerous awards, among others for “best educator“ and “best metal drummer“ in Modern Drummer magazine. Besides being a drummer in a metal band, Halpern’s interest in also exploring softer styles has led him to focus on developing a versatile signature snare which can be used for a variety of musical genres. Not only does its musical sound impress in every aspect – its stunning looks also show that this collaboration has definitely paid off. 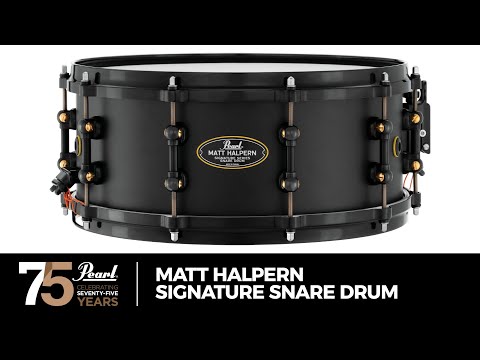 Matt Halpern and Pearl have succeeded in creating a superb-sounding, versatile brass snare which delivers a cutting attack, controlled sustain, and a great range for exploring many different musical genres and playing styles. On top of this, the Matt Halpern signature snare looks extremely good, as little eye-catchers like yellow vent gaskets and the brass tensioning screws on the STL Swivel Tube lugs create a distinct contrast to the black powder-coat finish and the rest of the hardware.

The Pearl company was founded in Japan in 1946 and has been making drums since 1950. After initially manufacturing exclusively for other brands, it began to produce drums under its own name in the 1960s. Initially, the company was strongly oriented towards American models, but over the course of time, more and more of its own designs were developed, and ultimately imposed themselves on the market. Today, Pearl is one of the world's leading manufacturers of drums, percussion instruments, and accessories. A milestone in Pearl's history is the Export Drumkit, introduced in 1982, which is believed to be the best-selling drum kit of all time.

Dry, versatile, and musical are the perfect adjectives to describe the Matt Halpern signature model – a real all-rounder, so to speak. The beautifully designed brass snare is perfectly fit for hard, aggressive musical styles that require the snare to cut through convincingly, but also for more mellow music and dynamic playing styles. Its expanded tuning range lets you coax a variety of different sounds out of it, while the SR-150 Click Lock strainer allows the tension of the snare wires to be precisely matched to the drumhead tuning.