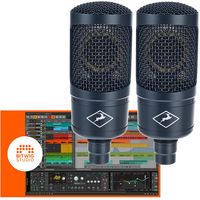 Including two Antelope Edge Solo as well as Bitwig Studio

All customers, that buy an Antelope Zen Tour Synergy Core Interface in the period from 1. May 2022 to 31. July 2022, will receive two Antelope Edge Solo Modeling microphones for free on top. Additionally, after registration you will automatically be sent an email with a licence for Bitwig Studio.

$877
to the product
Free of charge with this product
$1,758
The shipping costs are calculated on the checkout page.
In stock
In stock

K
Great flexibility, does what it's supposed to KinWu 17.09.2021
I upgraded to the Zen Tour after my Audient gave up on me. I'm currently using the Zen Tour Synergy Core via Thunderbolt 3 on a Windows 10 laptop, replacing the Audient as the centerpiece of my studio.

It was hard to look for a replacement for my Audient iD44, because it was hard to find an interface that had a significant upgrade in sound while having the Audient's flexibility. I use it to record vocals, acoustic/electric guitar, bass, analog synths, and I also send a stereo signal to my outboard effects and record them. I stumbled across the Zen Tour, and decided to give it a chance, despite previous negative reviews about driver issues. After using it for a while, I'd say everything about the Zen Tour sounds pristine, definitely a class above my Audient iD44 in all aspects. All the inputs and outputs (including the reamp output) work fine and sound great.

Here's what I like:
- the control panel, being able to route anything to anything
- number of quality input/outputs bang-for-buck-wise
- it sounds amazing
- Antelope DSP effects sound great
- buying the device comes with a good amount of Antelope plugins (for me, at least. As of the time of writing, it seems like what plugins are included is quite seasonal)

and what I don't like:
- while the thunderbolt driver works fine in the DAW, requiring a 3rd party app like Voicemeeter to play Windows Audio could be a bit of a hassle
- AFX to DAW doesn't run very smoothly on Windows 10 as of the time of writing, although AFX2DAW for Windows is barely 2 months old, so I'll cut them some slack.
- There isn't an immediately visible DSP meter like UAD which allows me to see how much of Zen Tour's DSP I've used for running their plugins

That's about it. Although there are a few things that I don't like about it, overall, it's been a very positive experience using it for the past 1-2 months and for me, the benefits far outweigh the downsides.
handling
features
sound
quality
2
0
Report

A
Big punch in small package. AndyLemi 27.12.2021
Besides of being aesthetically pleasing, the compact desktop unit is also has a very solid build quality and feel to it.
Sound wise the interface is superb. From inputs to outputs everything is sounding amazing. Antelope clocking and AD/DA converters are marketed top tier and this interface delivers just that.
The AFX effects sound great and the interface has vast amount of processing power to run them.
Overall I'm very pleased with this interface. Sure there's things that could be improved or changed, but for now there's no clear flaws for me.

So summing it up. I'm using the Zen Tour on both Windows (via USB) and OSX (via TB3) systems.

Things I love about it.
-The physical appearance, the robust build quality and connectors, locking power cable (I use this in a live gig setup/scenario and you learn to appreciate such things)
-The amount of I/O and the different connector types in such a compact form. This is like swiss army knive. There's really no scenario that this thing couldn't handle. The versatility is outstanding and there definitely is a LOT of features for the price.
-The routing and (4) internal mixers. Once again, the versatility of the routing complimenting the amount of I/O. That's just a superior feature. And the four software mixers are an outstanding tool to be used for monitor mixes or subgroups when recording live.
-The sound. The superb quality, it's just so audible.
-The AFX effects and the processing power. Awesome sounding effects and the ability to run multiple instances in multiple tracks
-Hardware presets. Another useful tool in many scenarios.
handling
features
sound
quality
0
0
Report

Z
Great product Zuurstok 05.02.2022
This is a great piece of gear.
After reading a lot of negative comments about this device and people complaining about support issues. I cannot say I had any experience with these negative issues. I bought this device because of the awesome inputs and outputs. You get a lot more for your buck with this device than other brands. The software takes some time getting used to but works just fine. Great routing options.

The only comment is the lack of modulation and reverb effect available in the antelope store. But the preamps and other stuff is great. AFX2DAW allows you to use the plugins in your daw.

Don't panic about old comments and trolsoline just screaming after each other without any knowledge. Don't buy something just because every Youtuber uses it because they get it for free.

I have no regrets buying this.
handling
features
sound
quality
0
0
Report