When you purchase this guitar during the period from 23.01. to 19.03.2023 you will receive a 3 Month Subscription for Fretello Pro Guitar with a value of EUR 59,99 for free on top. After your order has been shipped you will receive the licence key as well as the Download link send to you automatically by Email. Please be aware that the Fretello subscription needs to be cancelled on time and before the end of free trial.

Bring on the holidays

No guitarist wants to be without an instrument when they travel, and now, thanks to the Harley Benton GS-Travel Mahogany, they won't have to. As its name suggests, this guitar (top, back, and sides) is made from sturdy mahogany, which is richly grained and covered with a matt finish, giving it a natural yet elegant look. Despite its smaller size, which is typical for travel guitars, the GS-Travel Mahogany sounds like a full-sized guitar. As if that weren't enough, this guitar is also extremely affordable, so players can look forward to that next trip without having to sacrifice any of their holiday budget. 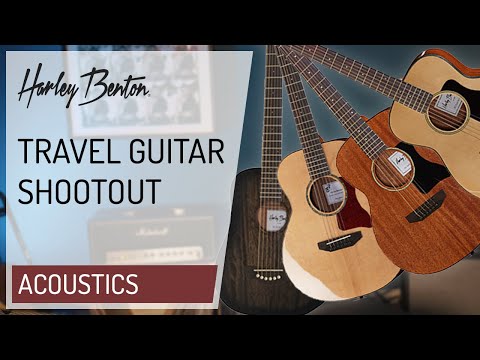 Despite being just 95cm long and 10cm deep, the Harley Benton GS-Travel Mahogany is by no means inferior to larger designs. On the contrary, the guitar's pronounced midrange and treble response give it all the presence it needs, while the mahogany construction ensures plenty of warmth and fullness, so it certainly sounds bigger than it looks. At the same time, the V-shaped neck profile gives the GS-Travel Mahogany a solid and high-quality feel combined with a high level of playing comfort thanks to its blackwood (pine) fingerboard with a nut width of just 43mm.

A great sound in any setting

Truly passionate guitarists will inevitably want to have their beloved instrument to hand at all times - wherever they happen to be. These players in particular will find the Harley Benton GS-Travel Mahogany to be an ideal companion, especially since its 596mm (23.5") scale length ensures an incomparably comfortable playing feel that also makes it great for players with smaller hands. Most distinctive, however, is the GS-Travel Mahogany's affordable price, because of which this guitar is the perfect choice for players who are looking for a second or third guitar that will still deliver a full and punchy sound comparable to that of OM models. And to ensure that the guitar can be transported in complete safety, a sturdy gig bag is included in the scope of delivery.

Ideal for jamming and songwriting

It goes without saying that travel guitars are made to be on the go. The Harley Benton GS-Travel Mahogany, with its robust construction and manageable dimensions, is no exception and will be thorougly at home as a backing instrument for singing songs at the beach or by the lake or as a solo instrument thanks to its excellent presence. That is not all, however: The GS-Travel Mahogany is the perfect solution wherever a compact guitar is needed, whether it be for a jam while lounging on the sofa (NOT something to try doing with a dreadnought!) or next to the player's desk, ready to go whenever inspiration strikes.

SH
Lovely, sweet little guitar S Harrison 09.02.2018
I bought this to play lounging on my sofa, laying on my bed or outside in the garden.
Out of the box, it's very playable - I haven't changed anything.
The mahogany gives a warmth to the sound, which I like. On a guitar body this small I don't think you'd need the brighter sound of a spruce top - I haven't tried the spruce version though.
Mine has a closely grained mahogany top rather than the more striped look of the one in the pictures - mine looks lovely. It's pretty light weight - ideal for what I bought it for. It sounds and projects much better than you'd think from the size (and price).
If I hadn't bought a CLA-15m soon after I'd be picking this up all the time - as it is, I pick it up a lot.
It has clarity, punch and warmth that are way above it's size and price tag.
Now the big question - is it as good as the Taylor? I have no idea, I've never played one. But it's the wrong question and missing the point; For the likely intended uses of this guitar, it's as good as you need.
Don't get me wrong - it sounds good, it plays well and it's fun to play. But do you really need to pay over £500 for a travel/sofa guitar?
It's hard to justify that unless you're recording with it a lot (to cut through the mix - and this will do the job). Or maybe want a smaller scale instrument for a child/teen. You could buy this and get two custom line acoustics (Harley Bentons) for that money - I know which I'd prefer and that's exactly what I've done.
Tuners - they do their job. People complain about a lot of new guitars not holding their tuning but it's just because they haven't bedded the strings in - (pull them away from the guitar 3-4 times, tune the string back up, do this 3 times for each string - you'll now hold your tuning). Speaking of which - when I tried that on this guitar the peg came off on the lower E string - I'm not bothered; I put it back in and developed a method of pulling the string parallel to the body, which works fine.
Construction is fine - don't expect bone nuts and bridge saddles at this price.
It's very neat and tidy, rather attractive and I love the curve on the back.
I have an old Martin travel guitar - I never play it. This is so much better - it's a proper guitar, just a bit smaller and light weight.
For the price it's a bargain - it even comes with a neat little gig bag.
If you want a full blown acoustic, I'd recommend one of the custom line ones. But I have plenty of guitars and I can't resist this little beauty - it gets far more of my attention than the price would suggest.
You know you want one.
features
sound
quality
26
1
Report

T
Unfreaking believable! Toddio 23.03.2022
I bought the HB traveler for my son in Colorado, hoping it would be even remotely as good as a 650 dollar baby Taylor. My son took it out of the box on his lunch break, tuned it up and recorded a song. Sounded awesome! The guitar belts out low end like my son's full size Taylor for 1/15 the price. Truly excellent quality at any price point. 90 bucks seems like a dream!
features
sound
quality
2
0
Report

B
Small but mighty Burningboy 08.12.2022
I bought this for teaching guitar. I work in primary schools and I needed a travel style axe and flexibility as I cycle to work. Also I wanted a guitar that I wasn't very precious about it, as younger students might like to try their talent with it while I'm out of the room....
I am a lefty and I knew I would have to change a few things to use it. (There was no lefty option available at the time of purchase). First job, I had to the change the mini tuner heads, they just didn't do the guitar any justice. I built a lefty bone nut and re-angled the saddle to mirror the direction for lefty, .The bridge material took the reworking very well..
The bag lasted about 2 years before wear and tear started shredding the straps, I gave it a lot of hardship as I attached other bags around the arm straps, with a heavy sheet binder and sometimes shopping etc. It was a champ......
The tone is lovely and warm, bright, punchy and clear. It has surprisingly good volume, maybe because of the bowled back. the neck profile is very comfortable and I love the scale length. It feels strange to go back to a Takemine.
All round lovely little guitar for any purpose. Sounds nice acoustic and in recordings.
It holds its own in a teaching environment against a couple of dreadnought guitars volume wise.
I give it about 25 hours of playing a week. It is showing no signs of fatigue after over 5 years, frets are still solid and straight, no fingerboard wear.
If anything happened to my present model, I would consider buying the lefty version. Hope this helps.
features
sound
quality
0
0
Report

J
How do they do it? Johan12 27.02.2020
I own this guitar for almost 2 years now and I absolutely love it. It's my only guitar at the moment and I play it daily.
I have been playing guitar for about 10 years. I mostly fingerpick and this is where this little guitar excells. It can also handle some light strumming but don't expect wonders.

All in all I would certainly recommend this guitar to beginners but also to more advanced players looking or a great little guitar to leave around in the living room or to take on holidays.
I have owned more expensive Takamine guitars and sold them all beccause I didn't play them anymore.
features
sound
quality
5
0
Report