With its numerous functions, the Startone MK-300 is an ideal model for beginners in the world of keyboards.

The Startone MK-300 provides an extensive range of sounds as well as useful practice options, making it a very good point of entry into the world of keyboards. The 61 velocity-sensitive keys provide a five-octave range and a high C, and the sound selection is rich and varied. The Startone MK-300 features an integrated metronome and a removable stand for reading sheet music. Different learning modes allow you to approach all kinds of musical scenarios with ease. The front panel includes a sustain button, and a connection for an external sustain pedal (available as an option) is provided on the back. The Startone MK-300 thus provides everything you need to get playing in no time at all. In this bundle, the keyboard is complemented by a stand and headphones. 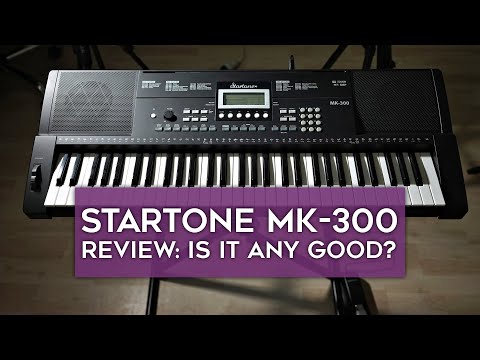 The Startone MK-300 delivers complex sound generation with 399 different voices and makes even nuances audible – an important factor when it comes to practising with attention to detail. It has a 64-note polyphony, more than the number of keys on the keyboard. This feature is particularly useful when using the Dual mode, which allows you to play two voices simultaneously. The Lower mode allows you to assign a different voice to the left hand, e.g. for playing bass notes separately. The Keyboard Split function means that each hand can play a different voice, which is particularly useful for practising and performing complete pieces. Finally, a drum kit playable from the keyboard is included for practising rhythms with more precision. The keyboard stand neatly folds up and is therefore easy to transport.

The variety of sounds and rhythms offers beginners a wide range of different settings with which to play and learn. The control panel is clearly laid out and includes rotary controls for volume and for voice and song selection. Unlike a weighted keyboard, that of the MK-300 is easy to play thanks to its low resistance. The sensitivity of the velocity response can be set to soft, normal, and hard, or even switched off completely. Weighing just 4.5 kg, the keyboard is easy to transport – and since it can run on AA batteries, it can also be played cordlessly. The headphone output will allow you to practise late at night, while the two 10-watt speakers can be used for intimate performances. A USB port allows MIDI data to be recorded, so song ideas can be quickly saved and edited on a computer.

The Startone brand is exclusive to Thomann and was established in 2005 in order to offer high-quality, playable instruments for ambitious beginners even in the lowest price bracket. This resulted in a steadily growing range of wind instruments for beginners, which has since expanded to include keyboard and stringed instruments, accordions, and even drum sets. The product range combines proven quality with low prices – and Thomann naturally provides a full three-year warranty on all Startone instruments. The brand's mission is to always provide the motivated beginner with a reliable, good-quality first instrument at an unbeatable price.

As well as offering players a wide range of tones, the Startone MK-300 also includes a library of 110 complete songs and eight demo songs. Some of the songs have extended intros and endings, fill-ins, and transitions, allowing you to practise as you would with a real band. Every level of difficulty is covered, meaning that beginner and advanced keyboard players alike will always have something new to practise and improve their skills. The LCD display shows the names of the chords played as well as the notes in the various exercises. The rhythm, tempo, sound, effect, and mix parameters can be saved using the four dedicated memory buttons so that they can be quickly recalled during later sessions, and songs can also be recorded internally using the integrated recording function. The included headphones are perfect for practising quietly and the keyboard stand neatly folds up, making it easy to transport and store.