$85
to the product
7
Arturia MiniFuse 1 Black

$84
to the product
$129
The shipping costs are calculated on the checkout page.
In stock
In stock

Straight to the point

The Arturia MiniFuse 2 is a two-channel USB recording interface that provides all the essentials you’ll need to start recording at home – at a very attractive price point. Rather than be burdened with multiple superfluous connections and features, often redundant in small studio setups, Arturia has instead focused on delivering the best sound quality possible, in the most effective and straightforward way possible. The MiniFuse 2 is, literally, “plug and play”. It operates easily and intuitively and comes bundled with a noteworthy software package (which includes an industry-standard DAW, amongst others) that will get you started right off the bat, without having to invest any further. The Arturia MiniFuse 2 is also future-proof, thanks to its fast USB-C port.

The Minifuse 2 is fitted with two frontal combo XLR / 6.3mm jack inputs which can be used with a microphone, a guitar or a bass (line levels are also possible). Switchable 48V phantom power is available for condenser mics. The Minifuse 2’s front panel also features a dedicated gain input knob, to control input levels, as well as a larger “central volume” control knob, which allows quick and easy access to not only the main outputs, but also to many important internal parameters. The 6 LED VU meters help with monitoring and staying clear of that dreaded “red zone”. The direct-monitoring output is pre-DAW to avoid system-induced latency during recording. A headphone output and its dedicated control knob complete the front panel. The back panel features two balanced, 6.3 mm jack outputs and two USB ports (both types A and C).

The Arturia MiniFuse 2 is an excellent starting block for those wishing to take their first steps into the world of home-recording. While many people certainly like the idea of recording their own songs, or indulge in wild sonic experimentations, within the comfort of their walls (or elsewhere), many are put off by what are perceived as insurmountable technological hurdles. Enter the MiniFuse 2: it’s “no nonsense” design and philosophy will appeal to the many, whether inexperienced neophytes, looking for a simple and intuitive interface, or accomplished home-studio producers, looking for the same qualities, alongside an uncompromising sound. The Minifuse 2 will suit perfectly, amongst others, guitarists, bassists, singers or podcasters, since they generally require only two channels. 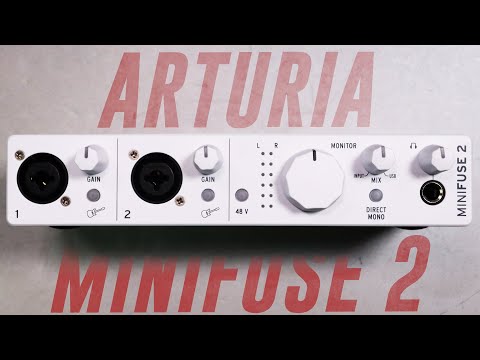 Arturia's success story began with software emulations of well-known analogue synthesizers such as Moog Minimoog, Sequential Prophet-5 and Oberheim SEM. The popular software instruments included in the V Collection are still flagship products of the French developer today. Over time, Arturia has gradually expanded its range and now also offers a host of hardware devices, ranging from synthesizers, keyboard controllers to sequencers. Thus, the former software developer has since also become a household name in the world of analogue synthesizers and other equipment.

Everything in one device

After buying an audio interface, it’s likely you’ll want to get started ASAP. For this to happen, you’ll also require the appropriate software. Conveniently, The Arturia MiniFuse 2 comes with everything you’ll need to get started (and more), including, at its heart, the world-renowned DAW (Digital Audio Workstation) Ableton Live Lite. Arturia’s Analog Labs is an excellent keyboard and synthesizer emulator, for those classic sounds and hands-on experimentation, while bassists and guitarists will appreciate Native Instruments Guitar Rig 6 LE, a wide collection of amp and cab simulations, which often make external amp-miking redundant. A handy auto-tune plug-in is also included, as is a sample/loop editor (with access to a vast sound library), and, finally, four high-quality FX developed by Arturia round-off the package.

GH
A really, really good interface Gary H 05.04.2022
SOUND: so crisp through JBL 305P speakers.
DESIGN: If you place interface on left side of desk, MONITOR knob can block R channel meter easily. Monitor outs are placed horizontally meaning you have to cross your L & R cables. It would be better vertically, like a lot of other interfaces. Not the end of the world though!
FEATURES:
Wow, it really does punch above its weight for this price. Has pretty much all of what the Motu M4 has plus it includes lots of software, a MIDI IN/OUT and also a hub extender. That's quite nifty!
WARNING: Check the power rating for each of your devices which will be plugged into your hub. It only provides for up to 250mA!
BUILD: Really solid, very nicely weighted - it will not move around easily Also I feel you could drop this 100 times without any concern. It's really well built

Side note:
I initially purchased the Motu M4 and while that has super, well thought out design, I was experiencing sudden "bit-crushing" type effect on the audio. This happened on two different machines running different versions of Windows (10 & 11). I then suspected the device or drivers were faulty. This led me to investigate and discovered it is a common enough issue even on the Motu M2 also. Thomann cover return shipping within 30 days which was neat.
quality
features
handling
sound
3
0
Report

KH
All in All a really good one! Kinan Halabi 11.04.2022
Read too many good reviews about this interface, so i bought it and i was not disappointed, I had one issue though.. I have some sound bleeding from my speakers even though the volume knob is set to 0 as well the headphones, so I would definitely check that if you are going to buy this one.

other from that i find the design nice and the sound quality is pretty good plus the pack of vsts that it come with.
quality
features
handling
sound
0
0
Report

e
Nice Interface eggyshoes 23.04.2022
I like it. Quality is very nice, metal build, tactile knobs. It's a nice interface for the money. Software was a bit difficult to figure out initially, however now seems to be easy to deal with
quality
features
handling
sound
0
0
Report