The MPS-1000 is the flagship model in Millenium’s range of electronic drumkits. It most eye-catching feature is that it combines wooden shells and mesh heads and thus visually resembles an acoustic drum set. At the core of the setup is a 20” bass drum, which is complemented by 10” and 12” rack toms and a 14” floor tom as well as a 13” snare drum. The set is rounded out by a cymbal set comprising a 13” hi-hat, a 15” crash, and an 18” triple-zone ride. This kit doesn’t just look great, however – with 820 sounds including a wide range of effects as well as 335 MB of storage capacity for saving your own samples (the equivalent of around 30 minutes of stereo sampling), it combines style with plenty of substance. And a Bluetooth interface is also included, so you can wirelessly connect your smartphone and drum along to your favourite music. 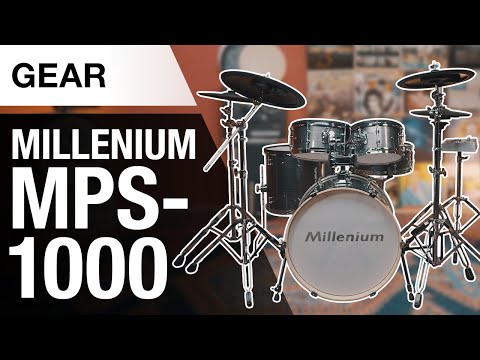 The MPS-1000 module is extremely easy to operate thanks to its 3.2” colour LCD display, and nine volume faders provide quick access whenever any quick changes need to be made. Each of the pads is connected to the module using a 25 pole D-sub connector, which vastly simplifies cabling. In addition to 820 sounds and 80 drum kits – half of which are freely assignable as user kits – the module also contains 70 play-along songs and 15 patches for storing your own recordings. The full set of mesh heads ensures an authentic playing experience that is kind to your joints, while the rubber pads on the generously dimensioned hi-hat and cymbals register hits across the entire playing surface.

The Millenium MPS-1000 is an excellent choice for advanced drummers who have high expectations in terms of looks, user-friendliness, and sound quality. On the one hand, this kit is a great “plug and play” instrument that lets you drum along to your favourite songs whenever you want to – even wirelessly thanks to its Bluetooth capability – and on the other hand, it also provides plenty of creative freedom for players looking to additionally modify their sounds and import their own samples to the module. And thanks to its appealing looks, the MPS-1000 doesn’t only cut a fine figure in the basement or rehearsal room – it is also 100% stage-ready.

The first “beat” is with the eye

As any drummer will tell you, looks are an important part of any drum kit – and while most electronic drum kits are immediately identifiable as such, the Millenium MPS-1000 is a clear exception. Most people who see it on stage at a school concert or a larger private event, for example, will mistake it for an acoustic set – all the more so since it comes complete with 40 excellent-sounding, and for the most part acoustic, drum kit presets. The classy-looking foil wrap on the drum shells evokes the look of numerous vintage drums that are currently highly sought-after, while also adding a fresh, modern dimension. All of this ensures that the MSP-1000 will always look resplendent wherever it is – stage, rehearsal studio, or living room.

D
Great value DrumminMountain 15.02.2022
After years of not having a drumkit, i finally had space and cash to get something.

I decided on the mps-1000, the way i figured, its the newest set there for newest software and hardware, the kit looks great and it has the height of a normal drum kit meaning i would be able to use it comfortably at 2 meters tall.

It took a couple hours to unpack and assemble and right away i found the instruction manual to be lacking a little, however the online manual is more detailed and was able to provide enough instructions.

the hardware is average at best, when you try to adjust the cymbal booms for example you can really tell its not the best, it takes some "manhandling" to get it into position.

Right out of the box i ran into an issue where the toms weren't triggering, only on 1 very specific spot would the tom trigger, everywhere else would trigger the tom-rim, but this was easily resolved by doing a factory reset, So if anyone runs into this issue, try a factory reset.

The downside to buying such a recent kit is the lack of tutorials/information you can find online.

Now i've never owned a roland, so i cant compare it to those, my previous drumkit was a alesis DM6 and this is by far loads better.

I absolutely love the feel of the cymbals, the hi-hat is awesome, i find it responsive and dynamic.

I am very very happy with this purchase and cant wait to spend many many hours with my new kit!
playability
features
sound
quality
14
1
Report

M
Amazing for the price Mike92 30.03.2022
This drum kit is an absolute joy to use and looks and feels great, it is very well built and has lots of modern features including use of your own samples and the ability to connect your phone or tablet via bluetooth to play along with anything and everything. At this price point it's a no brainer and I have set a MIDI Map to run my Addictive drums whilst recording and the dynamic curves are faithful to my playing without any time consuming edits, what an amazing piece of technology, I love it !!!
playability
features
sound
quality
8
1
Report

n
Incredible Value nicknaaame 29.01.2022
Primarily a guitarist, but trying to improve my drumming over the course of the pandemic I purchased an MPS-850 about a year ago. It was pretty good but I wanted a kit that felt real and not so cramped. This one way exceeded my expectations. Looks, feels, and plays like real drums.

Couple of caveats here: I replaced the heads with Drum-Tec Real Feels, and I am using Superior Drummer 3 for the sounds.

Compared to the MPS-850, you are given more control over how the drums respond; greater control over sensitivity and dynamics compared to the MPS-850. Nearly flawless. This is also a double edged sword. It took some hours of fiddling with the settings of the hi-hat (mechanically, in the module, and in SD3) to get it working correctly. Now that it is triggering reliably, I am loving it. The hardware is nice enough. The kick pedal is much improved from the 850. Some kick patterns that I was having trouble with on the old set are now easy to play. The cymbals are fantastic. The sounds from the module are lackluster, but they are definitely an upgrade from the MPS-850.

All in all, I am very pleased with this kit. I was considering going with a VAD, but I am now glad I chose the budget option. At this price it can't be beat. Doesn't feel like it is lacking at all in terms of utility.
playability
features
sound
quality
11
1
Report

LE
Decent kit for price Luke EarthWalker 07.05.2022
Lets see. I think for the price it is fine, but after having it for a while, I came to notice a couple of annoyances? which I will mention here, as there is enough reviews talking about the positives.

The hihat controler is not so good. I think it is decent when it works, but splashing the hihat is pretty much a guarantee. No matter how slowly I lift it, once it reaches the open value it splashes every time (at varying volumes), which is extremely annoying. I even set the velocity adjustment to the lowest value and it did not help in eliminating it. Why not use the tried and tested controller design I do not know, but I think the controller on MPS 850 felt better than this one. Hitting the half open sound can also be annoying, it seems to be quite a narrow window.

The snare pad misses hits. I dont know if it is playing too strong or a combination of head tuning along with strong hitting, but I notice the snare misses hits and produces no sound (mainly noticed this when practicing/performing flams, so take it as you will)

I will also mention, that the ride bell seems to be alternating bell and normal sound, even though the module still shows bell zone hit. So while the module can recognize you hit the bell twice, one sound will be bell and one regular ride sound. Have not tested with software, probably not a problem there.

The metronome is quite limited. I mean, I would expect at least basic quarter/eighth/sixteenth/32nd clicks present, these are the ones most used during regular practice. I would also expect triplet/sextuplet option. You can sort of fake it with 3/4 and 6/4 options but its not quite it. So if you prefer those clicks tough luck, only quarter note is really there. I also wish it would be easier to change metronome volume, you can only do it in the specific metronome menu, no quick and easy way to do it in the kit select screen. Maximum bpm setting is 240, if anyone is wondering.
playability
features
sound
quality
4
1
Report