Even though the Thomann DP-26 is one of the most affordable pianos in its price range, it is extensively equipped and of high quality. Like only a few digital pianos in this range, it has weighted keys with a hammer action mechanism, offering beginners the playing experience of a real piano keyboard right from the start and experienced players a realistic playing feel. Both authentic piano sounds and numerous other instrument sounds combined with flexible keyboard settings will provide variety together with easy and clear operation with many additional features for a fast feeling of success. The DP-26 is available separately or as a set.

The main aspects in a nutshell

Besides various piano and electric piano sounds, the DP-26 features 20 instrument sounds in total - from organ and strings through to vibraphone, plus effects like reverb and chorus. An automatic accompaniment feature with 50 piano accompaniment patterns and 60 pre-programmed practice pieces makes it possible to improve your playing skills, while the integrated recording function can capture ideas or record up to five songs to allow you to listen back to your own playing. If you want to connect the digital piano to a MIDI-compatible sound generator or to an amplification system, you can find the respective ports on the back of the DP-26, as well as the socket for the included sustain pedal.

The perfect partner for getting started

The Thomann DP-26 with its high-quality keyboard is perfectly suitable for beginners, but experienced players will also appreciate the authentic playing feel. For beginners, those taking up the instrument again, or occasional players, the DP-26 with its accompaniment patterns, practice pieces, and recording features provides a great way to improve their playing skills even without a teacher.

On a “real” piano, a lever construction produces a sound by causing a hammer to strike a string when a key is pressed. At the same time, a damper is lifted from the string so it can resonate. When the key is released, the damper moves back onto the string, stopping it from resonating. To transfer this process and the very special playing feel of a hammer or piano mechanism to a digital piano, some effort is required. This feature is usually only found in higher-priced Instruments. As the sound of this piano is generated electronically rather than mechanically, a sophisticated construction ensures an authentic playing feel. And because the keys themselves need to have a certain mass, they are “weighted” properly. 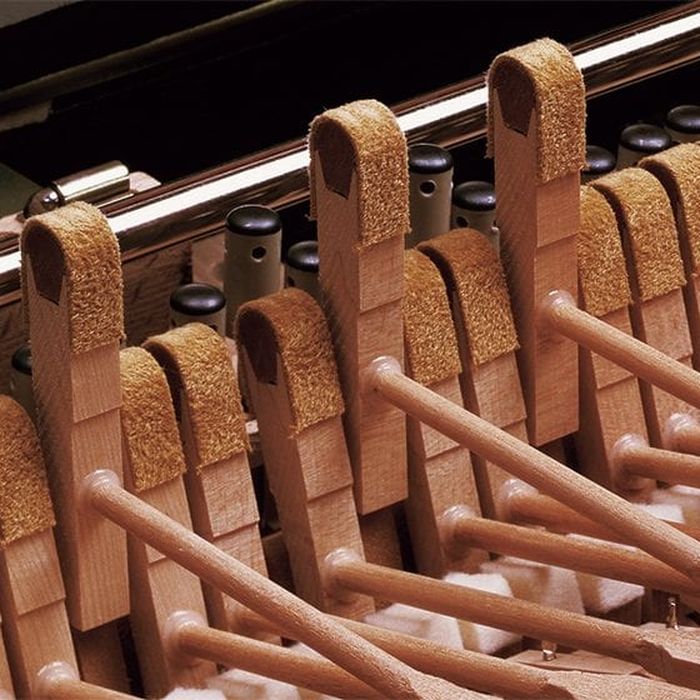 Thomann-brand instruments, which are exclusively built by renowned manufacturers, now constitute a large part of Thomann’s product range alongside numerous big-name brands. With unbeatable price-performance ratios, Thomann digital pianos are the obvious first choice for students and beginners – and others too. The technical features and uncompromising sound quality they offer are usually reserved for much more expensive instruments found in the professional market segment.

A piano for every environment

In the living room, in student digs, or at a clubhouse, the DP-26 forms the musical centre, either through its integrated loudspeakers or silently via headphones. The excellent features of this digital piano will prove their worth during music lessons, where among other details the separable keyboard ensures ideal conditions for four-handed playing or joint use between teacher and student. Weighing just 13 kg, the DP-26 surely isn't a heavyweight and can quickly be carried from the living room to a barbecue party.

M
Fantastic. Mofosir 26.01.2020
I'm a classically trained pianist, but due to various living accommodations I've been unable to have a proper piano at home for well over 10 years. Lately, I've been playing keyboards quite often, and decided to buy a stage piano, so that I can finally get my chops back.

First off - the keyboard feels great. Yes it isn't quite exactly the same as an upright, or a grand at that, but no stage piano I've tried ever had the exact same feel of a real one. That said, it feels fantastic. Coming off playing midi controllers and synths at home, it is a breath of fresh air! It feels close enough that after a couple of hours of playing I'm not really noticing anything different from the upright at the studio - the keys are moderately heavy, the springback is good, not to sudden but not sloppy as well, so fast passages and trills feel very natural. Again, while it doesn't feel exactly like a real piano, I'd say that the difference present is definitely acceptable, even negligible.

Now, built in sounds - the pianos are sort of fine, the first grand seems too muffled for my taste, but the second one is much better, defined, bright, has some kick to it in the lows, moderately chimey highs. It sounds a little weird when, say, a chord is sustained for a VERY long time, but that's minor, and a nitpick of sorts. The electric pianos are not to my taste, but that's just me. I like some of the organs, and my favorite apart from the grand is the vibraphone, which sounds great.

There's also some built in styles, drum tracks, etc, which I don't use, but it's there if You need it. Also has a built in metronome, which is quite handy. Level of reverb and chorus can be adjusted separately, as well as be turned off completely, independent from each other. There are adjustments to the sensitivity of the keys as well, works fine.

Now, the midi stuff - I've only used it via usb, and it's pretty much plug and play, everything I've used it with recognizes it immediately, latency is quite okay, no hassle with setups at all, it's great. This means that You can make it sound like virtually anything You want, plus, most daws (or something like Sibelius) will allow mapping straight to notation, which is super handy. As I've bought it with the idea of composing in mind, this is a huge thing.

Overall, I am overly happy with this purchase, it feels great, sounds fine, the speakers are loud enough for home use, but it does tend to sound fuller through an external source, which is easy to hook up. Can't really say much more, 10/10, thanks to Thomann for such a great product, very happy with it.
handling
features
sound
quality
19
1
Report

A
Thomann has made a very good product! Anonymous 21.03.2017
Pros: Very good sound and build quality, many modes and options to choose from,

Cons: Digital piano is big and bulky so it could take quite a bit of space.

Bought the digital piano as a present for my birthday so I can play with friends. From time to time we have sopme gigs so I could use this. I didn't have a big budget so I started looking and synths because it was the most obvious choice.But after some considiration I settled at what was the cheapest digital piano I could buy because it had all the 88-keys I wanted and it had a lot ofmodes, options and other music intrument sounds which are very fun to use.


To be honest I didn't really expect much from it because it was the cheapest one. When the digital piano came (acctually shipped very, very fast comparing to other sites) I was really happy because it was my birthday present after all. I hooked it up and started playing. I was astonished by the experience. I have played real pianos before. It felt like an actual piano. The sound is exactly like a real piano, keys are weighted so it feels like a piano, but the best of all - you don't have to tune the digital piano unlike a real piano. Also, another thing I enjoy is that, if you want a louder sound, than you need to press the keys harder, like on an actual piano. And the sustain pedal is quite nice too. Fells like a real piano sustain pedal. Not like those cheap plastic ones. I have also played a lot of synths and digital pianos, nad the bass notes on them sound terrible, but on this one, sounds good and fells like playing a piano. The digital piano itself isn't really heavy so I can put it in the car and get it to the place where I want it - like my friends house. But it is a large in size so it might not fit in other people's cars. And dont forget that this piano has ability to be used as a MIDI controller so it can be used to record (through an audio interface) what you are playing also with MIDI it can be used to play with different effects on different software. Thomann has made a digital piano very easy to use and very fun to play with, for example, it has voices like 2 grand piano voices, acorderon, church organ, guitar, bass and many more which I find very fun to use. I would recomend this digital piano to people who want to start playing the piano, but have a tight budget. But, in my opinion, also professional players would enjoy this because it has a lot of awesome modes like - transpose, pitch bend, duet, a music library, you can record etc. Litterally everything even a preofessionalpianist needs.
handling
features
sound
quality
18
2
Report

ES
Perfect for beginners Edward Sousa 02.01.2023
I believe you can't get a better instrument at that price, it has weighted keys that's perfect for getting used to heavier pianos and the board is not as limited as other instruments (that usually have less than 88 keys). 128 voice polyphony is not too high but it's enough resolution to sound good, again, perfect for learning or for limited budgets, while still maintaining quality, confort and a handy -though not too extended- number of functions.
handling
features
sound
quality
0
1
Report

g
Good quality price ratio grig_g 27.04.2020
This is the first digital piano I owe and I have been using it mostly for practising and for classical music. The feeling is not at all bad, with a nice key weight and response after you get used to it. One thing that could be improved is the loudness: even at the maximum volume (with Sony MDR-7506 headphones) the sound is not so loud, never really reaching a 'full volume feeling'. Also, the two grand piano options are very different and rather extreme, one being very very soft and rounded, and the other having that slightly rough metallic element to it. It would be nice to have more classical piano options, and maybe give up some of the other strange sound options that I personally might never use.
For the price is a good practice piano and I am overall happy with it.
handling
features
sound
quality
3
0
Report